According to data from market research firm NPD, 45 million iPods sold last year, and judging by this season's iPod refresh, unveiled on Tuesday, Apple isn't trying to change anything about its market-leading portable media players yet. 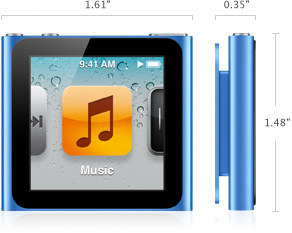 The "New" iPod Nano is exactly the same size as the model that debuted one year ago, except for three moderate changes. First, it has a slightly new UI with bigger icons, and 16 more watch faces for users who wear their Nano on their wrist. Second, fitness mode can now be used without the Nike+ accessory, and can track steps with the built-in accelerometer. Third, the price has dropped $20. The 8GB comes in at $129 and the 16GB costs $149.

The 2011 iPod touch came built-in with iOS 4.1, and the 2012 models ship with iOS 5, which is where most of the differences come into play. Apple says the OS refresh brings a total of 200 new features to the platform.

And the 160GB iPod Classic has not been discontinued yet, despite what some had suggested because of Apple's removal of clickwheel games from the iTunes app store.

12 Responses to Apple refreshes its iPod lineup...but not really