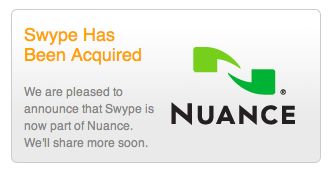 Nuance Communications has acquired drag-to-type virtual keyboard maker Swype for an undisclosed amount of money believed to be more than $100 million.

The acquisition should be an obvious one to anyone who paid attention to Nuance Communications.

Two years ago I said this acquisition was one of two possible outcomes for Swype.

Because Nuance built much of its success on T9 text prediction, which was actually invented by Swype's co-founder Cliff Kushler. Nuance later extended T9 text prediction into a product called T9 Trace…which was essentially the same product as Swype.

But judging by what Nuance showed us, and the company's comments about Swype, it didn't look to be creating a competitor, so much as a proof of concept that Swype and T9 could be unified in a single multi-modal text information input stack.

So even though Swype has found a great deal of success on its own getting hooked up with various handset makers as an optional text input method, Nuance's existing customer base comprises well over 85% of all phones.

Under Nuance, Swype can be licensed out much more efficiently. Now, manufacturers can have a text prediction engine, a speech recognition engine, and a novel keyboard all from a single body.

Neither Swype nor Nuance has issued a statement today, but both companies' websites have small announcements dedicated to the acquisition. We'll be looking for more information today.

Tim's disclosures, which include the fact that he's a Nuance shareholder