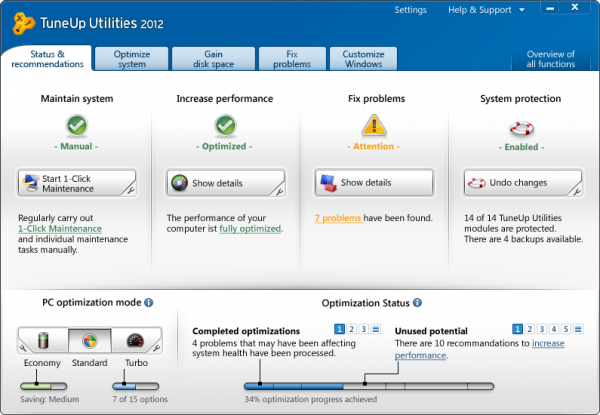 Every PC user would like their system to run a little faster, but making that happen yourself usually requires time, effort, and an in-depth knowledge of how Windows really works.

Does that sound too much like hard work? Then maybe you should just install a copy of TuneUp Utilities 2012, which the authors say can restore "over 50 percent of speed and free space" on cluttered PCs, while improving "battery life by up to 30 percent".

Of course there are plenty of PC maintenance suites promising much the same thing, some of which are even available for free. But this isn’t just another identikit optimization package. It has real depth, offers genuinely useful advice, and includes tools you won’t find elsewhere.

Is there enough power here to really speed up your PC, though? We decided to put TuneUp’s latest release to the test.

After a straightforward installation, the TuneUp Utilities 2012 immediately launched its 1-Click Maintenance tool, which quickly checked for the performance basics: Registry problems, broken shortcuts, surplus temporary files, startup and shutdown problems, and so on. The report appears within a couple of minutes, and you can then fix any issues with a click. This won’t have much effect, as 1-Click Maintenance is very limited (its hard drive cleaning only empties your temporary folders, for instance -- it doesn’t even touch the Recycle Bin), but it’s fine as a quick start.

And with that out of the way, we got our first look at the program’s new interface, which divides its functionality into five sections:

This is conventional enough, but a little cluttered, and not the easiest to follow. So it’s good to see the program has an "Overview" option, too; click this button and instead of the tabs you’ll see every tool listed on the same page, which may be an easier way to find what you need.

We started our tests by checking the core tools you’d find in any PC maintenance suite.

Additional one-click options can disable hibernation, Windows search indexing and so on, saving a little more. And a Disk Analyzer reports on your drives to show you what’s consuming the most space. We’d like a tool to locate duplicate files, as well, but otherwise this is a genuinely useful way to free up hard drive space.

Of course there are also a couple of options here to help control your Windows startup programs. The program can make specific recommendations, which generally include good advice, for example suggesting that you run Google Update as a scheduled task, rather than every time your system starts. Although, disappointingly, the program won’t create a substitute task for you; if you disable this kind of program and forget to set up a task (or never read the Task Scheduler suggestion), then you’ll miss out on updates, perhaps compromising your security.

And a second option displays all your startup programs, highlighting those it believes are unnecessary, and providing a "Usefulness" rating (courtesy of other TuneUp users) to help you decide what’s important. Startup programs can be disabled at a click, but conveniently they remain on the list. If you have problems, you can come back a week later and re-enable anything you like.

Elsewhere is a capable Registry Cleaner, quickly scanning your system to highlight problems, allowing you to view these in detail and delete them in a click. And even if, like us, you think that Registry cleaning does little of value, you should still appreciate the Registry Editor, launched via the toolbar. It looks like REGEDIT, but has more features; searching, for instance, quickly displays a list of matching Registry keys in a "Search Results" tab. It’s a very useful way to be more productive in your Registry work.

Install a big application like VMware Workstation or Microsoft Office, and it might add services, startup programs and other tasks that will slow you down. If this becomes a problem, and you use the program rarely, then you can uninstall it -- but that’s about all.

TuneUp Utilities 2012 offers another solution, though, in its Program Deactivator. Launch this and you’ll see a list of installed programs which, TuneUp Utilities 2012 claims, will have some performance impact on your PC. ITunes, say, has a "Medium" impact, apparently: if you have a copy, and rarely use it, then you can deactivate it at a click. TuneUp Utilities 2012 will then disable all iTunes associated services, Startup programs and so on, freeing up resources.

But the program remains installed, so if you ever want to launch it again, just choose iTunes from your Startup menu, and TuneUp Utilities 2012 will step in, re-enable it, and start the program for you.

We’re a little sceptical of some of the ratings provided by the Deactivator. It claims Google Chrome has the same "medium" load on your system as iTunes and O&O Defrag, for example.

But once you get past this, and start deactivating programs you don’t need, it really does work. We turned off Microsoft Office and freed up valuable resources; but when we relaunched Outlook later, it started only maybe 3 or 4 seconds slower than usual, and worked perfectly: very impressive.

New in this version is an "Automatic" function. Leave this turned on, and if you launch a "deactivated" program then TuneUp Utilities 2012 will automatically disable this again once you’ve closed it down. Which means your installed programs are always using the very minimum of RAM and CPU time.

The impact of this will obviously vary, depending on your software and how you use it. But if your system is packed with programs which you use only very occasionally, the Deactivator will help reduce their resource impact without the hassle of uninstalling them. And that could be worth the purchase price of the TuneUp Utilities 2012 all on its own.

Live Optimization, for instance, sees the suite monitor your running applications, adjusting process priorities to ensure everyone gets a fair share of resources. This idea can be useful in some situations, although we saw no benefit from it.

Turbo Mode is more useful. Enable this from the TuneUp Utilities system tray icon, and by default it’ll turn off scheduled tasks, disable Windows Aero and unnecessary Windows services, make sure you’re running the “High Performance” power plan, and more. The speed benefits are marginal, but it is a good way to free up resources and maximise your system’s speed when necessary (just before you run a demanding game, say).

And, new this time is Economy Mode, which aims to save energy by turning off your screen and hard drive when your system is idle, switching your CPU and wireless adapter to their maximum energy-saving mode, disabling unwanted services, and more.

This delivers little benefit over using Windows own power plans. We monitored a PC’s power consumption when using the Power Saver plan, and Economy Mode, and the latter used at best 2 percent less energy. Still, it does have a couple of advantages.

First, Economy Mode is easy to configure. There’s no technical jargon when setting up CPU energy saving, say – just choose the level of savings you need ("Maximum", “Medium” or "Minimum") and that’s it.

And second, power plans are a hassle to switch, but Economy Mode can be enabled in just three clicks (and can then optionally persist as long as you like, even surviving reboots). Get in the habit of switching and you really could save energy and extend laptop battery life.

Other TuneUp Utilities tools include a "Fix Problems" wizard, highlights potential issues like not having an antivirus program installed, UAC being turned off, devices with driver errors, and more.

An Uninstall Manager displays installed applications, and highlights those which have a high system load, or aren’t rated as “useful” (according to other TuneUp users). This may help you decide what you should uninstall, but the Manager won’t ensure that happens in full (it won’t in itself clean and remnants from your hard drive or Registry).

There’s also a basic, and rather slow defrag tool; simple utilities for checking your hard drive for errors, or recovering accidentally deleted files; and a small but surprisingly useful system information tool.

The Customize Windows tab provides so many tweaking options that it could qualify as a separate application, all on its own. There are options to customise your desktop, taskbar, Start menu, mouse, security, common applications and more. While TuneUp Styler allows you to change your logon screen, visual style, system icons and more.

And these tweaks, as well as most of the other settings changes you make, are recorded in the TuneUp Rescue Centre. So if you’re concerned about giving the program so much control over your PC, don’t worry: your original settings are always safe in the Rescue Centre, and can be restored in a couple of clicks.

TuneUp Utilities 2012 isn’t exactly short of features, then. But what can all this power achieve?

To find out, we installed the program on an average Windows 7 PC; it was moderately optimized already, but nothing too intensive, so there was scope for improvement.

Then we ran the 1-Click optimiser, and accepted all its recommendations. We cleaned up the hard drive to the maximum, defragged, sorted out all the systems problems, and used the Program Deactivator to disable some of the most heavy-duty installed applications.

And the results weren’t bad at all.

Boot time fell by around 13 percent. Running processes on PC launch dropped from 90 to 67; initial RAM use fell from 40 percent to 37 percent; resource use (as measured by system handles) fell by almost 30 percent.

That’s very acceptable, considering this PC was already reasonably well maintained. Installing the suite on an entirely unoptimised system would deliver even better results. And of course there are many benefits here not based on performance, like the improved Registry editor and Windows tweaking tool.

You could produce a similar effect by using other PC optimisation tools, of course, many of which are available for free. But TuneUp Utilities 2012 has more options than most of these, greater depth, and some really excellent modules, like the Program Deactivator,– that you won’t find elsewhere. And so if you’re interested in optimising your PC, but would like a little help, then give TuneUp Utilities 2012 a try: it really does deliver. The software is available for Windows XP, Vista and 7 -- 32-bit and 64-bit editions -- and lists for $49.95.