The answer depends on how third quarter sales are interpreted. By one perspective, gangbuster smartphone growth is over, as mature markets saturate and economic woes in Europe zap consumer budgets. By another viewpoint, a slowdown in iPhones sales -- ahead of a product transition -- pulled down the entire market. If the latter is right, iPhone sales could be considerably larger during fourth quarter than even the fiercest Apple apologist's or investor's dreams.

But there is more than just iPhone to consider. "Demand for smartphones stalled in advanced markets such as Western Europe and the US, as many users waited for new flagship devices featuring new versions of the key operating systems", Cozza says. "Slowdowns also occurred in Latin America and the Middle East and Africa". Strong sales in China and Russia offset some of the overall slowdown.

There's another way to look at the data and possible holiday quarter sales that is based more on actual performance and less on speculation about why iPhone share declined sequentially and year over year. Competitors produce better phones. Samsung rose to No. 1 in smartphone sales during third quarter, selling -- not shipping -- 24 million units. Apple apologists have criticized Samsung sales figures as deceptive, referring to shipments into the channel as sales. Gartner reports 24 million smartphone sales, triple those a year earlier. That puts Samsung's market share at 20.9 percent -- 14.8 percent for iPhone.

"Gartner attributes this to the strong performance of Samsung's Galaxy smartphones, which now cover a broad range of prices, and a weaker competitive market". The weaker market meaning less iPhone competition, which the firm asserts will rebound fourth quarter. Perhaps. 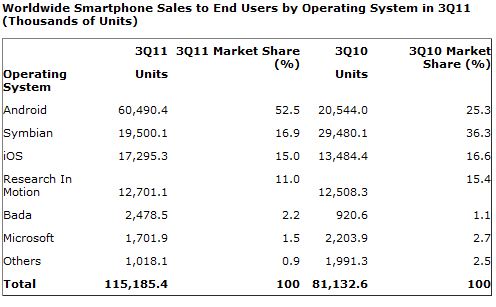 But Android smartphone OS share is 52.5 percent, more than double Q3 2010, while sales nearly tripled. Based on actual performance Android overall and Samsung with three operating systems (Android, Bada and Windows Phone) pushed well ahead, while iPhone and iOS fell behind.

Some of the strongest competing smartphones launched this quarter, including various Galaxy S II models, new HTC and Samsung Windows Phones and a swath of 4G LTE models from AT&T and Verizon. The latter carrier now offers eight LTE models, with, another, the highly-anticipated Galaxy Nexus coming soon. There's no LTE iPhone.

"Some consumers held off upgrading in the third quarter because they were waiting for promotions on other new high-end models that were launched in the run-up to the fourth quarter holiday season", Cozza continues. Other people waited for rumored "price cuts on older iPhone models; this affected US sales particularly".

With respect to fourth quarter, price cuts on iPhone 3GS and iPhone 4 are wild cards that could dramatically affect sales. The 3GS is free and iPhone 4 $99 with carrier contractual commitment. In May, I recommended a similar strategy of offering cheaper, iPhone 4 everywhere. It's how Apple can boost sales in emerging markets and slow the Android Army's advances. Emerging markets like Brazil, China, Mexico and Russia are "becoming more important to Apple", according to Gartner, accounting for 16 percent of sales. The firm asserts that when weighing in price cuts on older models "iPhone has a place in emerging markets".

Gartner may be right about an iPhone rebound in fourth quarter -- or not. Regardless, increased competition should be good for consumers looking for bargains during the holidays. Pardon me, I can't resist: Android and Windows Phone deals will be available on current models. For example, leaked Radio Shack ads show the Galaxy S II Skyrocket selling for $50 on Black Friday. To save on iPhone, you pay for older models.