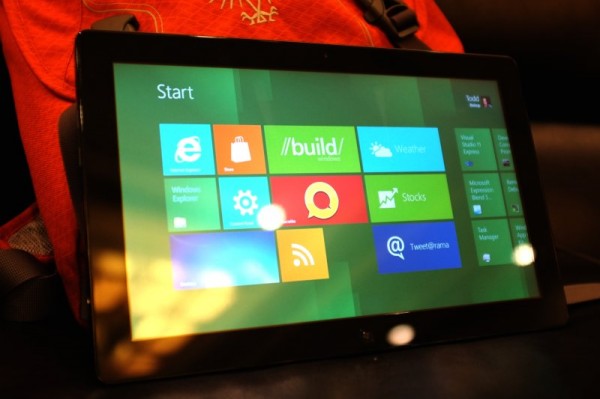 That's my question for you to ponder and to comment and debate about. Yesterday, a Forrester Research analyst proclaimed "Microsoft has missed the peak of consumer desire for a product they haven't yet released" -- it's already too late for Windows 8 tablets. He's absolutely nuts, I say. Or is he?

The analyst, JP Gownder, contends that "Windows 8 is going to be very late to the party" and Apple and Samsung tablets "will likely be into their third generation by the time Windows 8 launches". Microsoft is a late-starter to the tablet market. Meanwhile consumers have lost interest. "In Q1 2011, Windows was by far the top choice of consumers" with 46 percent US consumers pining for a tablet running Microsoft's OS. "By Q3 2011, that picture had changed dramatically...interest among consumers dropped to 25 percent". It's recipe for failure, he contends. I'm not sure what Forrester pays Gownder, but, hey, my more competent analysis is free.

There are numerous flaws with Gownder's reasoning:

1. Microsoft isn't late to the tablet market. The company jump-started the category with Windows XP Tablet PC Edition in late 2002. Gartner and IDC still treat that pioneering category separately from Androids and iPad, which are classified as media tablets. Windows slates are PCs. Gownder contends that Microsoft is last to market. No, Microsoft was first to market but lost momentum, something that can be recovered leveraging off the Windows monopoly.

2. Plenty of attractive Windows tablets ship today, like the Samsung Series 7. These take advantage of touchscreen capabilities made available with Windows 7. What really separates them from Android tablets and iPad is price. Media tablet starting prices are now around $199 for Androids and $499 for iPad. Windows slates typically sell for much more. For example, Microsoft Store has the Series 7 slate for $1,299.99.

3. Gartner and IDC don't casually categorize Windows slates as PCs. These devices are meant to be used as personal computers, not adjuncts to them like most Androids and iPad. Again, using Samsung's slate as example: 11.6-inch Series 7 is the touchscreen equivalent -- and many ways it's superior -- to Apple's MacBook Air.

4. Windows 8 supports ARM processors, which fundamentally will broaden the form factors and pricing options compared to x86 models like Samsung Series 7. OEMs will be able to bring many varied products to market, all leveraging the robust Windows ecosystem.

5. Gownder's data analysis draws the wrong conclusion about declining consumer interest in Windows slates. For starters, buying intention often doesn't lead to sales. More importantly, declining interest easily represents something else: Consumers' response to a market vacuum. Fewer people desire what they can't get: Windows tablet for about the price of iPad or less.

6. Forrester's data is only about consumers, but Microsoft's enormous install base is business. Enterprises will want tablets that run office, that fit into existing business processes and can be securely managed. Windows is the known quantity, and many larger organizations will wait for it.

7. The media tablet market is in its infancy and still tiny compared to PCs. Apple's sudden rise shows just how volatile it is and Amazon's Kindle Fire shows just how disruptive new entrants still can be. From that perspective, there is plenty of opportunity for Microsoft to catch up -- and let's qualify that. It's Microsoft and partners. The software giant doesn't manufacture or brand tablets.

8. Microsoft does its best work when backed against the wall. Time and again, Microsoft has caught up in markets where it started behind. Trust me, there is real urgency in Redmond, Wash. to protect the Windows monopoly from possible tablet encroachment, particularly among businesses.

Yesterday, my colleague Ed Oswald reported about the Forrester analysis. This morning, after writing my reasons above, I looked at some of the comments.

BetaNews reader mshulman and I agree. He writes: "A Windows 8 tablet could be purchased and used as the only device since it can run all of the programs one might use. The only exception would be programs that just require too much power such as video editing and serious gaming..etc."

They say this on everything MS does. They are always late to the game with the most reasonable product. Xbox, Xbox 360, Xbox Live (even though Sony is free), Windows XP, 7, Windows Mobile 7. All of these were late compared to others but they have shown to be better and sell better than anyone else...Late to the game doesn't mean you lost as we see with Microsoft sales of Kinect vs Wii.

Apple was late to smartphones and tablets, and look at its success in both categories -- and that was starting from scratch. Windows is incumbent.

Commenter easson is spot on, writing:

Microsoft believes that there is not one single, unified market for tablets. Instead, it believes that the tablet market is currently split into two distinct segments: 1) Those people who want a limited capability gadget (e.g., iPad), and 2) Those people who want a full-function tablet that has all the portability and ease of use of existing tablet gadgets, but which are also capable of running 'serious' applications (e.g., word processing, spreadsheets, etc.) on a 'serious' operating system (Windows).

It intends to initially target the latter market with Windows 8 running on tablets using Intel CPU's. It intends to target the first market with Windows 8 running on lower-priced ARM CPU tablets which can only run the newer 'Metro' apps. Why lower-priced? Because they can't run the millions of Win32-based legacy Windows applications, and thus are less valuable in the buyer's eyes. (But, it is quite likely that Microsoft will offer its main applications like Office for ARM processors once Windows 8 is released.)

This situation should prevail until the number of Metro apps grows considerably, at which time the two segments should blend together.

It remains to be seen whether or not Microsoft is right about there being two segments. Once Windows 8 tablets are released in late 2012, there should be some preliminary hints of whether they are right. The proof of the pudding will come in 2013, however.

So what do you think?

53 Responses to Are Windows 8 tablets DOA?