Similar in concept to Flipboard, Zite or any of the dozens of "iPad magazines," Google Currents lets readers subscribe to different news sites and view their Google Reader RSS feeds paginated like a magazine, instead of infinitely vertical like a website. A user's Gmail account is tied with their Currents reading list, so sharing on Google+ has been built into the service.

Another major element to Google Currents' design is the "trending" section, which automatically updates the app with the top five stories across all Google News topics. Users can pick which topics they want to follow on top of this.

The service launches with approximately 150 different content partners, but Google has launched a self-service publishing platform to let any website owner syndicate their content on Google Currents and track their metrics with Google Analytics, so plenty of content is sure to follow. 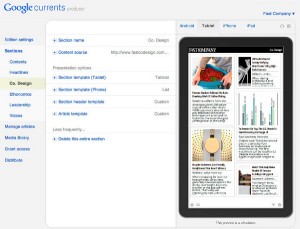