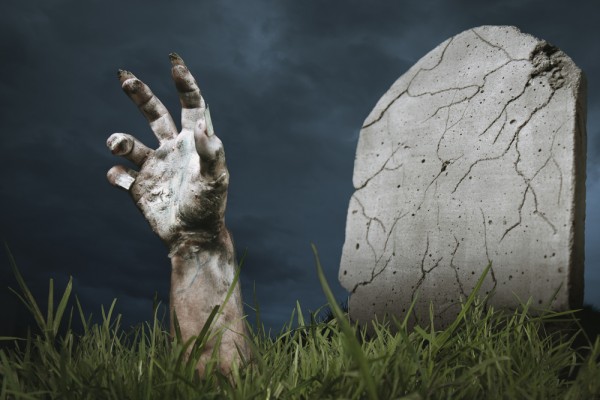 Here's what you do at Microsoft when you can't boast about how high Internet Explorer usage share is: You trumpet about how low it is. In what has to be one of the strangest blog posts coming out of Microsoft in weeks, Roger Capriotti proclaims: "IE6 usage in the US has now officially dropped below 1 percent!" Well, it's nearly 8 percent globally, Bud, but what kind of cheerleading is this? Generally companies tout who uses their products, not who doesn't.

But that's the strange state of Internet Explorer 6, which Microsoft can't seem to kill -- and not for want of trying. Days like this, I want to be an artist (sadly, capable stick figures exceed my drawing capabilities). It's so past time for someone to portray the browser that won't die as some kind of undead creature.

I understand why Microsoft wants to destroy this relic of an older Internet age and reminder how letting IE development languish for so long allowed a new browser war to arise, leading to massive loss of usage share. Then there are the security concerns. But this death watch thing is really kind of weird. Is reminding people about IE6 really the best kind of marketing? I suppose when it's the one area where lost market share is welcome. But, please!

I'm sympathetic. I jumped on the IE6 death train years ago, but also hoped (not necessarily believed) it would have reached its destination by now. In February 2010, when Google smartly snatched the initiative from Microsoft by banning IE6 on its websites first, I suggested 5 ways Microsoft could seize the day. A month earlier I asked (and answered): "Should you dump Internet Explorer NOW?"

Lost IE6 share doesn't mean gains for IE8 or IE9. The newer browser doesn't run on Windows XP, which remains the most widely-used version of Microsoft's PC operating system. Those users could adopt IE7 (cough, cough) or instead get a modern browser in Google Chrome or Mozilla Firefox, as both are available for Windows XP. So all this IE6 death tooting is potentially as good for Microsoft's browser competitors. So again, I wonder what the real marketing value is proclaiming Internet Explorer 6's death -- also when it's not yet expired.

That brings me to the other strange counter-intuitive -- more likely, counter-marketing -- part of Microsoft's IE6 death campaign: The Internet Explorer 6 Countdown, which tracks the browser's demise. There's really something downright goolish, like watching grandpa on the breathing machine -- relatives keeping vigil over the geezer, waiting to collect their inheritance.

"This website is dedicated to watching Internet Explorer 6 usage drop to less than 1 percent worldwide", according to the Countdown. That goal was achieved right here in the old US of A in December with 0.9 percent browser usage share. Those damn Canadians -- 1.4 percent! Mexico is 0.8 percent, by the way.

"IE6 has been the punch line of browser jokes for a while, and we’ve been as eager as anyone to see it go away", Capriotti writes. Roger, don't take any of this personally. Everyone at Microsoft already knows me to be a sorry SOB. But you guys should do this differently. Last week's blog post about IE9 share rising points the way. Let's have a countdown -- or should that be count up -- site for when IE9 share exceeds IE8. Something that truly praises and supports the modern browser rather than standing death watch over the relic.

Let's face it, with all those Chinese IE6 users, the browser really is undead. But, hey, maybe there's some strange sci-fi movie script in all this. Or perhaps viral YouTube video, where IE9 vanquishes the Internet Explorer 6 undead. Okay, so I'm no screenwriter, but you get the point. Right?