What are the top domains used for spam? 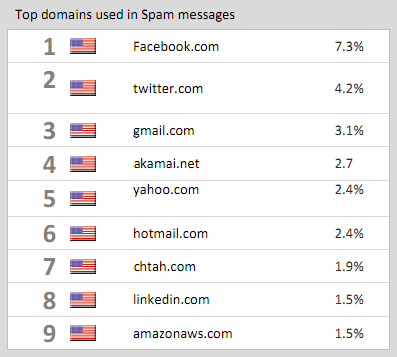 It's likely that most will expect domains belonging to popular web-based e-mail services are at the top of the list for the mountains of spam we receive everyday. That's not the case: the most common spam domains according to Chelmsford, Mass.-based security firm AVG are social networks.

Facebook tops the list at 7.3 percent, followed by Twitter at 4.2 percent. Considering these are the top two social networking sites, that's not too surprising. How about Google+? Hard to say since it doesn't have its own domain, nor did google.com appear in the list AVG supplied us. LinkedIn also appears, but way down in eighth at 1.5 percent of all spam.

Webmail services do show up in the third spot, with gmail used in about 3.1 percent of all spam. Two other webmail domains show up, yahoo.com and hotmail.com, in the fifth and sixth spots with 2.4 percent each.

Spam isn't just originating from what most of us likely consider to be the most common sources. Akamai.net, associated with the company who delivers up to a fifth of all Internet traffic, sees about 2.7 percent of all spam originate from its servers.

Chtah.com is another domain where spam finds a home: 1.7 percent of spam originates from the domain. It belongs to CheetahMail, an established e-mail marketer owned by Experian. Even the cloud is getting into the act: rounding out the survey is amazonaws.com, Amazon's Web Services domain. It seems you can't go anywhere without being spammed these days, no?

One Response to What are the top domains used for spam?