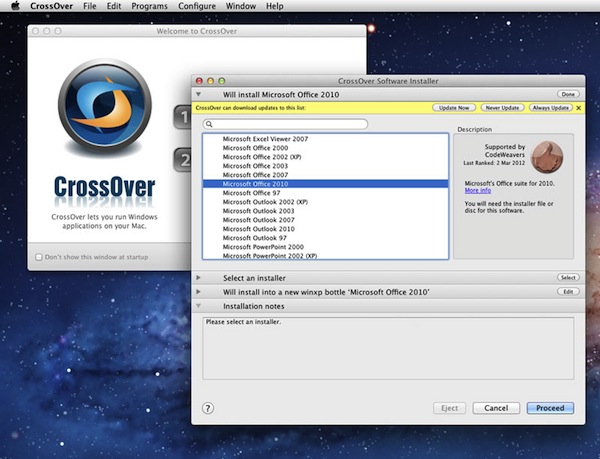 Codeweavers has announced the launch of CrossOver XI, its commercial port of the open-source Wine application that allows Linux and Mac users to run Windows applications without having to install Windows itself.

CrossOver XI sees the two previously available separate editions of CrossOver, Games and Pro, incorporated into a single application, and includes numerous platform updates and improvements. It also promises support for a wider range of applications than before, including Microsoft Office 2010.

CrossOver XI replaces both CrossOver Pro and CrossOver Games lines by combining their functionality into a single product, meaning that all applications and games previously supported by one app or the other can now be run from within CrossOver XI.

The application itself receives a number of updates, including improved naming conventions and publishing handling of bottles, along with progress bars being displayed during bottle creation, simulated reboot and bottle initialization.

The Mac version of CrossOver now ships with quartz-wm, which should both enable most Mac users to install the software without having to install Apple’s X11 app, plus resolves bugs with running apps in full-screen mode in Lion.

The major underlying change is that CrossOver XI is now based on the latest stable release of Wine, which stands at version 1.4. This includes a new Device Independent Bitmap engine for better and faster image drawing, improved mouse handling in Linux, better C++ runtimes and audio support improvements.

CrossOver XI introduces official support for Microsoft Office 2010 and Quicken 2012 applications, while all .NET Frameworks from 1.1 to 3.5 are now supported. There is also a large number of improvements for applications already supported, including various iterations of Microsoft Office products, DirectX 9 and Steam.

A full list of changes, improvements and fixes can be found in the application’s release notes.

CrossOver XI is available as a free 14-day trial download for Macs running OS X 10.5 (Leopard) or later, and Linux. Codeweavers has also announced that CrossOver XI will be the last version to support Leopard users – future releases will required OS X 10.6 (Snow Leopard) or later. Prices start from $39.95 depending on the length of free upgrades and support required.