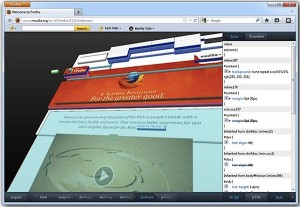 As part of Mozilla’s rapid-release cycle program for its open-source, cross-platform browser, the recent release of Firefox 11 FINAL has now been followed by updates for its various developmental branches, namely Firefox 12 Beta, Firefox 13 Aurora, Firefox 14 Nightly and Firefox 14 UX.

Versions 11 and 12 feature little to excite the Firefox user base, but look further ahead and you’ll see some interesting new developments on the horizon. Read on to discover more about what’s happening with Firefox and to pick the perfect build for you.

As always, this is the recommended release for most Firefox users. As with version 10, there’s not a lot to get excited about with version 11, although it’s still an essential update for all.

Version 11’s most notable new features concern those wishing to switch from Google Chrome -- you can now import your Chrome bookmarks, history and cookies from the Bookmarks Library (select Import and Backup > Import Data from another Browser). Meanwhile Firefox Sync users while be pleased with the new option for synchronising add-ons in addition to all the other supported settings.

Web developers also get two new tools for use in the Page Inspector: a 3D (Tilt) option for viewing HTML pages, and a CSS Style Inspector.

The Beta channel effectively puts you six weeks ahead of other users, albeit with some risk due to the fact this version of Firefox is still undergoing testing. Firefox Beta also installs over the top of the FINAL version, so should appeal to those willing to risk the odd crash or bug.

Having said all that, there’s nothing remotely interesting lined up for Firefox 12. The most notable change, other than a refresh of the media controls used to control HTML5 video playback, is that Windows users will no longer see the User Account Control security dialog pop up when updating in future as Mozilla moves across to a silent update mechanism.

Things get a lot more interesting when you examine what’s new in Firefox 13. Note, however, that Aurora is an early “alpha” build of Firefox, with minimum testing and many bugs still to be found and fixed. It’s installed as a separate program alongside Firefox FINAL or Beta, but shares settings with the more stable version, so shouldn’t be run simultaneously, and back up before you begin. 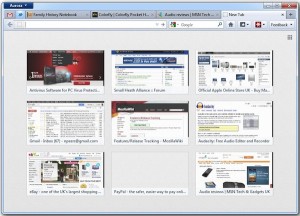 The Mozilla Wiki Release/Tracking page reveals some major changes to the program’s user interface are mooted, but these are still listed as being in “development”, and have been since being linked to Aurora since version 12. Some, however, are present in Firefox 13.0a2 and can be previewed now, including the New Tab page, which apes the preview thumbnails found in Chrome and Opera, and an option to reset your Firefox user profile (type about:support to access this feature).

Other features not yet visible include a new Home tab. This will be small pinned tab on the left of the Tab bar that’s stored locally and which allows the user to create their own customised home page. It’s a modular component with its development split into various phases, and its functionality will expand over time, with the aim of giving users easy access to bookmarks, settings, downloads, history and the Apps Marketplace. Also yet to be implemented is the ability to integrate web apps directly into the desktop.

Three further features have officially “landed” in Aurora, and should now make the transition to the final build: inline URL auto-complete, automatic session restore with tabs on demand (a new default setting -- users can set these options manually from within the General tab of Firefox’s Options dialog), and incremental garbage collection, an under-the-hood tweak to Firefox’s memory management settings. 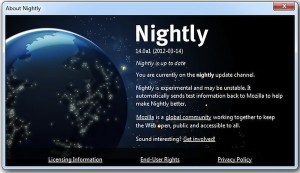 A number of features are currently being implemented for this release, many of which we suspect will slip. These include support for the new Windows 8 Metro interface, plus various performance tweaks, including the promise of startup improvements for Windows users.

At time of writing, however, the panel-based download manager that’s referred to in the Wiki Release/Tracking pages as being implemented in Firefox 14 is still missing -- see below for an explanation.

This parallel nightly build of Firefox Nightly (also available in 64-bit form for Windows and Linux) is where the major changes to the Firefox interface are worked on in isolation to the rest of the code. Some of the changes have made their way into the main testing builds -- these include the New Tab button. However, in what appears to be a major development, the panels-based downloads manager that was present in UX 13 has been dropped from UX 14, and not made the transition to Nightly as originally expected.

According to Bug 726444, the feature has been “backed out” ahead of more testing. We hope it reappears soon, but for now UX users will find little to differentiate this build from the Nightly one. In the meantime, you can preview the planned Download Manager redesign via this YouTube video.

Which version of Firefox should you try? Stick to the most stable version you feel comfortable with, although the temptation to sneek a peek ahead is actually quite compelling with these latest developmental builds.

Of the upcoming releases, Firefox 13 Aurora, due in around 12 weeks time, is definitely the most exciting, with a number of noticeable changes due to be implemented. The temporary loss of the revamped panel-based Downloads Manager could be a major setback, however -- we hope the bugs are ironed out soon and the feature makes a welcome reappearance. If you’re on the Nightly or UX channel, keep an eye out for its return.

If you do plan to take a look into the future of Firefox, back up if you plan before installing Beta or Aurora builds of Firefox. And If you do decide to give the Nightly or UX builds a try, consider using a non-critical machine or virtual setup (try VirtualBox) instead of your main computer, just in case…