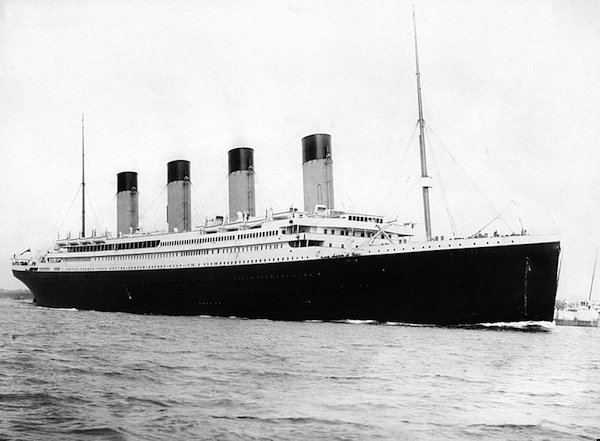 April 14 is the 100th anniversary of Titanic's sinking. As the height of technological and engineering innovation of its day, the great ocean liner is more than fascinating for its sinking -- reminder that today's tech obsessions are nothing new.

In 1977, before the wreck had been discovered and when few people knew much about Titanic, I wrote a term paper on the ill-fated vessel in between college and high school. I participated in the federally-funded Upward Bound program for teenagers from low-income families wanting to go to college. I spent three summers at Bowdoin College in Brunswick, Maine. The Titanic paper completed my three-year participation. Much about the disaster has changed since the wreck site was found, more than 2 miles beneath the Atlantic, in 1985, and my research. I confess. I am a Titanic buff.

For my 1977 paper, which I no longer have (sigh), I culled published testimony from US and UK inquiries, newspaper articles, a riveting 1912 Scientific American article and several books. Research is easier now, in the Internet era. In the spirit of the centurion week anniversary remembering Titanic, and those who tragically fell with her, I present 10 things you might not know about the great steam ship disaster.

1.There were three ships. William James Pirrie, president of shipbuilder Harland and Wolff, and Bruce Ismay, White Star Line chairman, conceived the Olympic Class ocean liners during a dinner party -- in 1907, if I rightly recall. Harland and Wolff would build three: Olympic, Titanic and Britannic -- in order of their going into service.

Titanic was inches longer and lavished with grandeur compared to her sister. Olympic stayed in service until 1935, when she was scrapped. After being refitted as a hospital ship, Britannic sunk during World War I, in 1916.

Britannic construction completed after Titanic's tragic maiden voyage, leading to design changes later made to Olympic, too, such as extending watertight doors from E to B deck.

2. Olympic Class was too big. Titanic and her sister ships used three normal-size docks. Meanwhile their innovative triple-screw propellers created hazard for other ships. For example, as Titanic left the harbor on her maiden voyage, the New York pulled from its moorings and towards the giant liner. The ships came within inches of collision -- averted only by stopping Titanic, even with tugs pulling on New York.

Many seaman called the near collision, by the New York on the way to New York, a bad omen. It was.

3. Olympic's accident added to the unsinkable myth. In September 1911, the battle cruiser HMS Hawke rammed Olympic midship, sucked in by the triple-screw propellers. The accident opened two compartments to seawater -- damage that would have sunk most any other vessel. But Olympic's watertight doors contained the leakage, allowing her to return to port and to service, with repairs, less than two months later.

4. Head-on collision with the iceberg likely would have saved Titanic, but killed many passengers. The ocean liner's design allowed for any two compartments to be flooded or all of the first four. Had Titanic hit head on rather than "port around" the iceberg, the damage likely wouldn't have flooded all four compartments. Olympic herself is example. She rammed and sank a German submarine in 1918.

Damage done by the glancing blow opened five compartments to seawater, allowing it to flow over the watertight bulkheads at E deck. A glancing blow killed Titanic.

5. Still waters made the iceberg difficult to see. The official inquiries conducted following Titanic's sinking faulted the crew and White Star Line for not having enough binoculars handy, particularly in the crow's nest where lookouts spotted for ice. The oversight proved crucial that night because the ocean was still, like a lake, and it was a moonless night. Waves would have created mist off the iceberg, making it easier to see -- as would reflected light from the moon had there been any. Lookouts spied the iceberg just a quarter mile away. Too close.

6. There was another ship close by. James Cameron's 1997 movie "Titanic" left out a hugely important detail -- rightly so considering it had nothing to do with the storytelling. But this omission creates misperception in popular Titanic lore. Somewhere between six and 10 miles away, the Californian had stopped for the night because of ice -- something Titanic should have done, frankly. But the ship did nothing to save Titanic, leading to reprimands for captain and crew during post-disaster inquiries.

In a strange twist, wireless operator for Carpathia, which steamed to Titanic passengers' rescue, returned to check the time over wireless before going to bed. Otherwise he also would have missed the distress call, sent first as CQD and later as SOS, which was new.

Later, Californian's crew observed Titanic on the horizon, not knowing the steamer's identity, and the rockets signaling trouble. Several times, crew members woke their captain, who dismissed the flares' significance. They would later wrongly view the sinking as the unknown ship disappearing over the horizon.

US and UK inquiries hotly debated whether or not the Californian could have saved Titanic passengers. Likely not, given how long the ship took to navigate past the field of ice during daylight. But, of course, captain and crew should have tried.

7. Official inquiries concluded Titanic sank whole. Survivor testimony conflicted about the ocean liner's plunge into the Atlantic. The UK inquiry ignored passengers who insisted Titanic broke apart before sinking, which we now know is what happened. Even after the sinking, and technological innovations' failure to save Titanic, arrogance and the unsinkable myth misguided those seeking answers to the disaster's cause and the ship's final minutes.

Perhaps they were brave, but there was another factor. Contrary to presentation of Cameron's "Titanic", the ocean liner's keel did not rise 90 degrees high out of the water, but no more than 23 degrees, which by the way is more consistent with survivor testimony. This means the sinking was more sudden and unexpected, particularly the time between the fracture and stern's plunge into the Atlantic. Point: Titanic's final moments came quite suddenly and while the steam ship appeared seaworthy to those on top and below for still some time.

9. White Star wanted to send Titanic's ghost to ferry survivors. Following Carpathia's rescue of Titanic passengers, some dimwit wanted to send Olympic to take them to New York. Reasoning: Provide them with better accommodations. Fortunately, this didn't happen; for already traumatized passengers, Olympic would have been like a ghost ship -- Titanic returned.

10. It was "A Night to Remember". The definitive pre-wreck discovery work about Titanic, based on the original testimony, is Sir Walter Lord's book "A Night to Remember", from which a movie was made. If not for the 1976 Copyright Act, the book would have entered public domain this year. What irony!