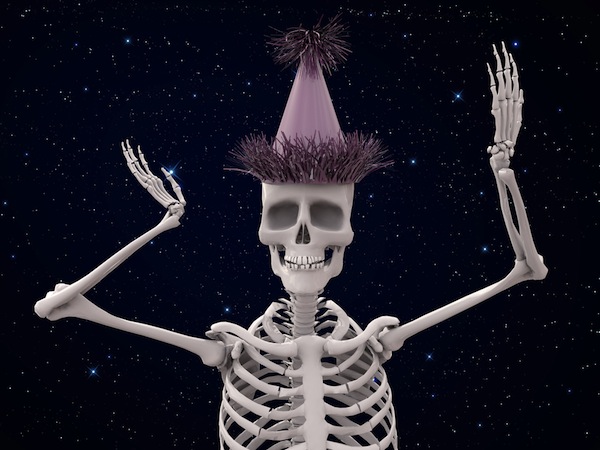 Few high-tech companies have imploded like Nokia and at the strangest time. Typically, dominant companies get killed during transitions from where they rule to where they don't. Nokia is oddest exception, imploding during a major computing era shift that favors its core competency. Transition from the PC to the mobile device eras is underway -- to a market where Nokia was, until recently, share leader by huge margins. How low the mighty has fallen, and former Microsoft division president turned Nokia CEO Stephen Elop wields the missile codes that launched self-inflicted nuclear strikes.

Today's Nokia earnings report is a disaster. It's radioactive fallout from Elop's decision to turn over the Finnish company's crown jewels to Microsoft. Elop sold Nokia's soul to his former masters, which I described at the time as a "silent takeover" of the company. Nokia needed new leadership, not new technology -- Elop's fundamental platform and cloud services switch -- to combat escalating Android and iOS competition. Before his tenure, Nokia did the right things, just in the wrong ways. Since taking the chief executive's seat in Autumn 2010, Elop has done the wrong things in all the right ways to destroy a once proud mobile device innovator.

Companies are successful for many reasons. Leadership is among the most important. Good leaders inspire their underlings. They instill confidence among the loyal troops and raise their morale. Instead Elop disgraced all Nokia employees by showing absolutely no faith in them or the hugely successful mobile business their work produced. When justifying the Windows Phone switch, he called Symbian a "burning platform".

In a long memo, Elop wrote: "I have learned that we are standing on a burning platform...We poured gasoline on our own burning platform...Nokia, our platform is burning". In business, perception is everything. Yet Elop contributed to the perception that the global leader in handsets and mobile operating systems was a failure. He fed the fire of hype burning behind Android and iPhone. If anyone lit Nokia's platform afire, it was Elop and his negative memo that spread more FUD -- fear, uncertainty and doubt -- about Nokia's future than any competitor ever could. Elop isn't the harbinger of positive change but negative perceptions.

Then he chucked away the most successful mobile operating system on the planet -- with install base that dwarfed Android and iOS. The only thing burning about Symbian and planned successor Meego was the fire Elop set. He burned down the house -- no, he nuked the city -- in order to build anew.

The extent of devastation is nowhere more apparent than Q1, the first full quarter of results after Nokia shipped the first handsets running Windows Phone. Smartphone sales boom everywhere else, globally rising 58 percent in 2011 to 472 million units, accounting for 31 percent of all handset sales, according to Gartner. There is huge market transition underway that rivals capitalize on. Look at Apple's 35.5 million iPhones sold in fourth quarter, by Gartner's reckoning.

Lumia 'Sales Have Been Mixed'

Nokia's Windows Phone transition is a major part of the problem, lessening demand for Symbian smartphones. First quarter global sales aren't available from analysts yet, but, according to Gartner, Symbian smartphone share fell to 11.7 percent from 32.3 percent in Q4 2011. The company that invented the smartphone, dropped from first to third place, behind Android and iOS, respectively. 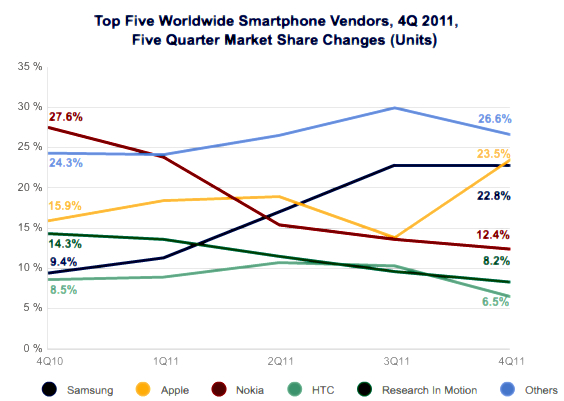 Today, Elop says the hard thing -- and he deserves credit for it: "Actual sales results have been mixed", referring to Lumia Windows Phones. That's a polite way of saying they suck. During fourth quarter, Microsoft mobile OS share fell from 3.4 percent to 1.9 percent, according to Gartner. First quarter numbers aren't available, but as the IDC chart above shows it's a trend.

In February 2011 I warned: "Nokia will lose customers and market share. It's the inevitable consequence of such a massive operating system switch. Timing is terrible". That's not a rocket science conclusion. Android and iOS device sales soared and higher still later in 2011. Again mixing metaphors, it's like Elop called his race car to the pits during the Indianapolis 500 to change engines.

Now he's desperate. "We have a clear sense of urgency to move our strategy forward even faster". Elop says -- and he should. But where was that urgency in early 2011, when he turned over platform development responsibility to Microsoft?

Burning Down the Brand

Nokia had much to build on before Elop nuked it. For starters the brand. Wireless analyst Tomi explains: "More people use a Nokia phone than drink a Coca Cola, than wear Levis's jeans, than tell time on a Timex watch, than wear Nike running shoes, than smoke Marlboro cigarettes, or write with a Bic pen". While Nokia's brand may not seem much to Americans, it's huge everywhere else, particularly Asia, Europe and Africa.

"What was life like before Stephen Elop started to destroy the brand most widely spread on the planet?" Ahonen asks. Much better is the answer. While Nokia bled share before, the Windows Phone transition and Elop's performance opened an artery.

Unquestionably, Nokia had problems before Elop joined the company. Smartphones like N97 couldn't compete with iPhone, cloud services proved to be clunky and developers fled for Android Market (now Google Play) and Apple's App Store. But these were fixable problems with leadership and even a few cloud and software acquisitions. Instead, Elop nuked this city in lieu of urban renewal.

Nokia 808 PureView, announced in late February is sure sign of what the company could have done with Symbian. The truly innovative smartphone sports a 41-megapixel camera but not Windows Phone. So much good that was Nokia is now lost.

I'm a big Nokia phone fan -- have been for years. I would be ecstatic to be proved wrong, to a year hence write a mea culpa story. But looking at how much worse off Nokia is today than 14 months ago, when Elop cut the Microsoft deal, the big Windows Phone turnaround is more Harry Potter magic than Albert Einstein Relativity.

119 Responses to Nokia does the Windows Phone death dance