IBM is at a tipping point 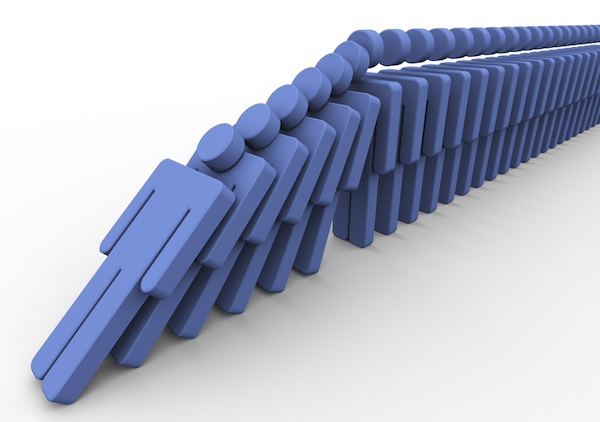 Fifth in a series. When I was growing up in Ohio, ours was the only house in the neighborhood with a laboratory. In it the previous owner, Leonard Skeggs, had invented the automated blood analyzer, pretty much creating the present biomedical industry. Unwilling to let such a facility go to waste, I threw myself into research. It was 1961 and I was eight years old.

I was always drawn to user interface design and quickly settled, as Gene Roddenberry did in Star Trek half a decade later, on the idea of controlling computers with voice. Using all the cool crap my father (a natural scrounger) dragged home from who knows where, I decided to base my voice control work on the amplitude modulation optical sound track technology from 16mm film (we had a projector). If I could paint optical tracks to represent commands then all I’d need was some way of analyzing and characterizing those tracks to tell the computer what to do. But the one thing I didn’t have down in the lab in 1961 was a computer.

That’s what took me to IBM.

I wrote a letter to IBM CEO T.J. Watson, Jr., pecking it out on an old Underwood manual typewriter. My proposal was simple -- a 50/50 partnership between IBM and me to develop and exploit advanced user interface technologies. In a few days I received a letter from IBM. I don’t know if it was from Watson, himself, because neither my parents nor I thought to keep it. The letter invited me to a local IBM research facility to discuss my plan.

I wore a suit, of course, on that fateful day. My Dad drove me, dropping me at the curb and telling me he’d be back in a couple of hours. It was a different era, remember. The car, a 1959 Chrysler, was blue with cigarette smoke.

Inside the IBM building I met with six engineers all dressed in dark suits with the skinny ties of that era, the tops of their socks showing when they sat down.

They took me very seriously. The meeting, after all, had been called by T.J. Watson, himself.

I made my pitch, which they absorbed in silence. Then they introduced me to their interface of choice, the punched card.

Thirty years later, long after he retired, I got to know Homer Sarasohn, IBM’s chief engineer at that time. When I told him the story of my experience with IBM he almost fell off his chair laughing. My ideas were good, Homer said, they were just 40 years too early. In other words they were still 10 years in the future when Homer and I were talking a decade ago.

The message that came over clearly from those IBMers back in 1961, by the way, was that they were a little embarrassed by their own lack of progress. Terminals weren’t even common at this point but they were coming. If I could have offered them a more practical magic bullet, I think they might have grabbed it.

So when I write these columns about IBM and you wonder why and where I am coming from, it’s from that boyhood experience of a huge company that took me seriously for a morning, possibly changing my life in the process.

Alas, that IBM no longer exists.

My recent IBM columns have stirred up a lot of interest everywhere except in the press. One reporter called from Dubuque, Iowa, but that’s all. This is distressing because the story I’m telling has not been contradicted by anyone. Nobody, inside or outside IBM, has told me I have it wrong. In fact they tend to tell me things are even worse than I have portrayed.

As a reporter I know there are always more stories than I have time or space to write, but this silence from the U.S. business press is deafening. Here is a huge news story that is being completely ignored. It’s not that it has gone unseen. I know who subscribes to the RSS feed for this column and it includes every major news organization in America and most of them in the world.

It’s one thing to be unheard and another to be ignored. This strikes me as an editorial decision based on not pissing-off an advertiser, which should make us all sad.

Editor: We didn't ignore you, Robert, which is why we asked your permission to repost this series in its entirety. You're right, this story isn't getting the deserved attention. The other stories in this series: "The downfall of IBM"; "Why is IBM sneaking around?"; "It's a race to the bottom, and IBM is winning"; "How do we just fix IBM?"; "IBM as at a tipping point"; "Today's IBM, rotten to the core".

But back to IBM. A curious paradox has emerged in this story. There have been apparently at least two versions of the so-called Pike’s Peak presentation laying out IBM’s personnel plans to meet its 2015 financial goals. Both versions date from last summer with one saying US head count will be cut 78 percent by the end of 2015 and the other saying head count for the USA and Canada will be cut by 85 percent in that time.

If both presentations are legit, what does this mean for IBM Canada?

It suggests to me that IBM intends to withdraw from Canada entirely, possibly serving Canadian customers remotely from the USA or maybe direct from India. I haven’t been told this. All I am doing is a calculation on the back of an envelope, but that’s the way the numbers look to me.

Maybe the Globe and Mail should pay attention.

IBM is at a tipping point. This week I’ve been told job offers from IBM are half of what they were last week as new policies start to take effect. IBMer after IBMer has reported to me draconian cuts that will make it very difficult (maybe impossible) for Big Blue to fulfill its contactual obligations in the event of a regional (multi-customer) crisis like an earthquake or hurricane.

Contradicting my first column in this series, even IBM workers on federal contracts including defense and national security accounts are being affected.

What the heck is going on here?

I have a theory, of course.

I think huge parts of IBM (especially Global Services) are being readied for sale. Fixating solely on the bottom line, IBM appears to be cutting every expense it can in order to goose earnings and make those divisions being put on the block look more valuable.

Are buyers really that stupid?

They probably are. All it takes is an auction environment with one snowed bidder to force the eventual buyer to knowingly pay more than the assets are worth.

It’s a clever tactic but if a disaster happens before such a sale can close, it will have been an experiment with terrible consequences for IBM customers.

8 Responses to IBM is at a tipping point