It’s a race to the bottom, and IBM is winning 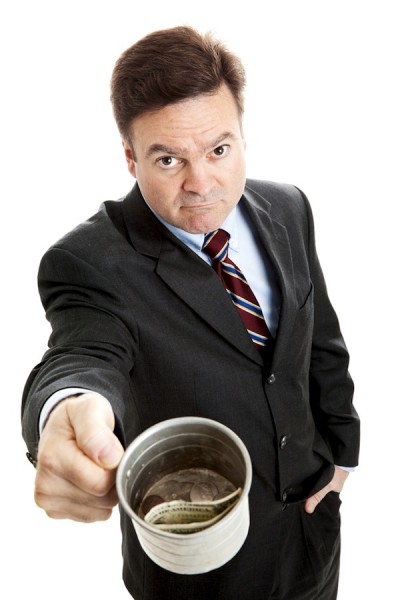 Third in a series. The current irrationality at IBM described in my two previous columns, here and here, is not new. Big Blue has been in crazy raptures before. One was the development of the System 360 in the 1960s when T.J. Watson Jr. bet the company and won big, though it took two tries and almost killed the outfit along the way. So there’s a legacy of heroic miracles at IBM, though it has been a long while since one really paid off.

There are those who would strongly disagree with this last statement. They’d say that with its strong financial performance IBM is right now in one of its greater moments. But haven’t we just spent 2000 words showing that’s not true? Successful companies aren’t heartsick and IBM today is exactly that, so the company is not a success.

Looking back over the 35 years I’ve been covering this story I can see in IBM an emotional and financial sine wave as rapture leads to depression then to rapture again, much of it based on wishful thinking. The first IBM rapture I experienced was pre-PC under CEO John Opel, when someone in finance came up with the idea of selling to IBM’s mainframe customers the computers they’d been leasing.  Sales and profits exploded and the amazing thing was the company began writing financial plans based not only on the idea that this conversion largess would continue essentially forever but that it would actually increase over time, though obviously there were only so many leases to be sold.

When the conversions inevitably ended, IBM execs were shocked, but Opel was gone by then, which may have set another important precedent of IBM CEOs getting out of Dodge before their particular shit hits the fan. We see that most recently in Sam Palmisano, safely out to pasture with $127 million for his trouble, though at the cost of a shattered IBM.

Thanks for nothing, Sam.

Opel was followed by John Akers, who enjoyed for a time the success of the IBM PC, though Bill Lowe told me that IBM never did make a profit on PCs. No wonder they aren’t in that business today. Akers‘ departure was particular gruesome but it led to IBM looking outside for a leader for the first time, hiring Lou Gerstner, formerly of American Express.

Gerstner created the current IBM miracle of offering high-margin IT services to big customers. It was a gimmick, an expedient to save IBM from a dismal low point, but of course it was soon integrated into IBM processes and then into religion and here we are today with an IBM that’s half IT company, half cargo cult, unable to get beyond Gerstner’s stopgap solution.

Ironically, in Palmisano’s effort to continue Gerstner’s legacy, he destroyed almost every one of his predecessor’s real accomplishments.

Where will future IBM growth come from? Wherever it comes from, can IBM execute on its plan to grow new businesses using cheap, underskilled offshore talent?  If Global Services is struggling to hang on, how well will this work for the new IBM growth businesses coming up?  As IBM infuriates more and more of its customers, how long can IBM expect to keep selling big ticket products and services to those very same customers?

Global Services is a mature business that has been around for about 20 years.  In IBM’s 2015 business plan big income is expected from newer businesses like Business Analytics, Cloud and Smarter Computing and Smarter Planet.  Can these businesses be grown in three to five years to the multi-billion dollar level of gross profit coming from Global Services?  Most of these businesses are tiny.  A few of them are not even well conceived as businesses.  It takes special skills and commitment to grow a business from nothing to the $1 billion range.  Does IBM have what it takes?

Do you remember eBusiness?  Do you remember On-Demand?  These are recent examples of businesses IBM planned to grow to billions in sales, businesses that no longer exist today.  Some claim that Blue Gene is shortly to be shuttered, too.

Here’s a simple thought experiment. When it comes to these new software and Internet services, IBM’s competition comes from a variety of companies including Amazon, Apple, Dell, Google, Hewlett Packard, Oracle and others. Does IBM have an inherent advantage at this point against any of those companies? No. Is IBM in any way superior to all of them and thence in a position to claim dominance? No.

IBM isn’t smarter, richer, faster moving, better connected. They may be willing to promise more, but if they can’t also deliver on those promises, any advantage will disappear.

IBM is still buying profitable businesses, of course, imposing on them IBM processes, cutting costs and squeezing profits until customers inevitably disappear and it is time to buy another company. It’s a survival technique but hardly a recipe for greatness.

My opinion is that IBM’s services business profit will continue to decline as they try to cost cut into prosperity. Unless they find a way to grow revenue and provide a quality product (service), they’re either headed for a sell-off of the entire service business, probably to some Indian partner, or to a complete implosion. In short, it’s a race to the bottom, and IBM is winning.

Yes but, readers tell me, that’s just services, not the real IBM.

There is no real IBM, not any longer.

The company has become a cash cow. You never feed a cash cow, just take money out until the cow is dead.

Hardly respect for the individual, eh?

If IBM is planning a 78-percent staff reduction, then that will of necessity involve all USA operations, not just Global Services.  Hardware, systems, software, storage, consulting, etc. will all see serious staff cuts. This means IBM could be moving a lot of its manufacturing and product support offshore. Raleigh, Lexington, Rochester, and several other IBM communities are about to lose a lot of jobs.

Every non-executive job at IBM is viewed as a commodity that can be farmed out to anyone, anywhere.

IBM was once so special but today there’s little difference between IBM, AOL, or Yahoo except that IBM has better PR. All three are profitable, something we tend to forget when it comes to AOL and Yahoo. All three are effectively adrift. All three are steadily selling off the bits of themselves that no longer seem to work. When Global Services is gone, what will IBM sell next?

6 Responses to It’s a race to the bottom, and IBM is winning