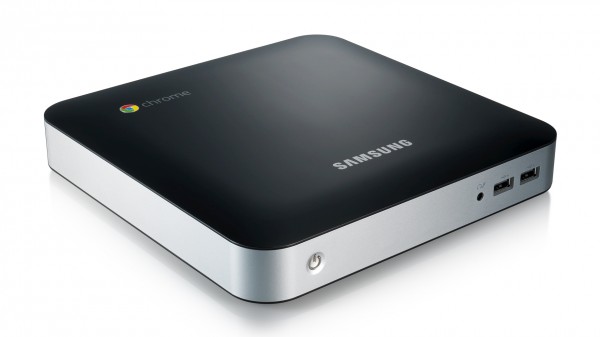 Chrome OS is taking up new residence. Today Google and Samsung launch Chromebox, a Mac mini-like computer to which buyers attach keyboard, mouse and monitor. The idea isn't novel: Users keep their existing peripherals while upgrading hardware and migrating to a spanking new operating system. For anyone looking to get off the OS X or Windows train, Chromebox proves to be an affordable alternative running Google's browser-boasting, cloud-connected Linux-based OS.

Samsung Series 3 Chromebox joins Samsung's second-generation Chromebook, the Series 5 500, also launched today, and it's a bargain by comparison -- $329 versus $449 for WiFi-only laptop and $549 for 3G combo. The chromebox also sports a faster processor, 1.9GHz vs 1.3GHz for Chromebook. The cloud-computing device, now with loads of local functionality and storage, is well-suited for educational institutions and small businesses.

However, new pricing plan could make Chromebox costlier for some businesses or institutions. Google launched the original Chromebook with a multi-year monthly subscription plan, but that goes away today. Under the new scheme, businesses buy the device at the manufacturer's suggested retail price plus $150. For schools it's MSRP plus $30 per device. The extra fee covers maintenance and other services. That said, one institution or small business could deploy a single Chromebox for many users, making $479 or $359 a smart, managed investment.

That's in part because of the cloud box concept. Chrome OS development closely follows the browser, which revs a new version about every six weeks. So Google will improve the Chromebox experience fairly frequently, within every few months compared to several years for OS X or Windows. Google dispatches these updates automatically, as it does with other cloud products or services, providing low- to non-touch IT management.

Meanwhile, starting with Chrome OS 19, Google changed the user experience, so it's more desktop-like. There is a window manager now, taskbar, app launcher and other new features. Additionally, Chromebox is meant to be used in always-connected environments, removing concerns about cloud access. If the network is done, every user is, whether they use PC, Mac or Chromebox. All are equal on the network.

Google already touts customer wins: Dillard's, which the search and information giant claims will deploy "hundreds of Chromeboxes in more than half of their US stores", while Kaplan, working with Genesys, is moving its New York City call center to WebRTC and Chromeboxes.

As part of the ongoing development process, Google is focusing more on simplifying setup and management, including auto-update and auto-enrollment controls. Additionally, Chrome Remote Desktop, currently in beta, allows educational institutions or businesses -- and consumers, too -- to tunnel into their Mac or Windows desktops to run older apps. Yes, Virginia, you can have Chrome OS and use your legacy stuff, too.

I have strong reservations about Chromebook's long-term performance-to-price value, because of the slower processor and much higher price. Chromebox, by comparison, offers lots more for lots less.

I have a Chromebox and will soon publish a review. But I've got to ask here and now: Will you buy one?