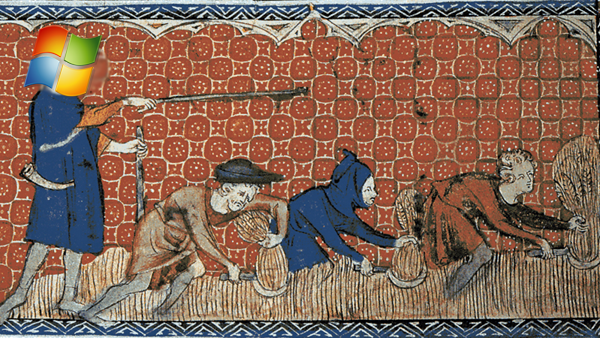 Today marked another win for Microsoft while under the watchful eyes of Judge J. Frederick Motz, who dismissed the antitrust lawsuit brought by Novell. The case stems from a complaint that Microsoft deliberately withdrew namespace extension APIs for Windows 95, knowing they were key to Novell's application, with the intent of thwarting software application competition. Specifically to give an edge to the Microsoft Office suite over third-party products.

At the time, 1994, WordPerfect had 30 percent productivity suite market share worldwide. WordPerfect had developed its rich user base since the days of MS-DOS and was more widely used than Microsoft's own competing upstart Office suite, which had only been released a few years earlier.

Novell in a public statement says it plans to appeal the decision.

As previously stated, Novell and Microsoft were before Motz last year. The 2011 case ended when he issued an opinion granting Microsoft a "Rule 50 motion", essentially dismissing the case. A Rule 50 motion, which is made by a judge in hung-jury cases, is called a "judgment as a matter of law motion." In the 2011 case, a lone 21-year-old security guard was the holdout juror for the dead-locked jury.

But in the other court case, Novell's argument had been cut down to a single claim that Microsoft violated Section 2 of the Sherman Antitrust Act by monopolizing the software applications market, limiting competition. Novell sought nearly $1 billion from Microsoft. Judge Motz explained in the published decision why he dismissed the case:

Although Novell presented evidence from which a jury could have found that Microsoft engaged in aggressive conduct, perhaps to monopolize or attempt to monopolize the applications market, it did not present evidence sufficient for a jury to find that Microsoft committed any acts that violated [Sherman Act Section 2] in maintaining its monopoly in the operating systems market.

Even though I am not a lawyer this is still a very puzzeling decision as some of the evidence brought to trial even included what some called a smoking gun memo from Bill Gates that stated:

I have decided that we should not publish these extensions. We should wait until we have a way to do a high level of integration that will be harder for the likes of Notes, WordPerfect to achieve, and which will give Office a real advantage.

And in what could only be more head wrapping after this damning memo is Judge Motz's reason in saying why this isn't a prime example of an antitrust case:

A monopolist is free 'to exercise [its] own independent discretion as to parties with whom [it] will deal, It is well established that a monopolist generally has no duty to cooperate with its competitors.

This ruling leaves me with a disturbed, ominous concern for the future of software development. Has Judge Motz opened a precedent that will allow companies like Microsoft, Apple or even Google the right to dictate a total monopoly market power over third-party applications that run on their Operating System and platforms? If Microsoft, Apple, Google or any platform developer has competing application products, can it now just refuse to cooperate technically with software vendors that write applications for their platforms?

It seems that Motz is ruling in favor of unfair market advantage completely negating the point of the Sherman Act and antitrust laws. If this is so companies like Apple; who already do the same thing with their iOS platform in blocking "applications that duplicate iOS features", now have legal carte blanche to do so. This could turn out to be a very disturbing ruling for all third-party software developers.

It could be the digital equivalent of the days of old when the king of France took a liking to your wife, and then sent you off to war so he could have his way with her. Or in this case, copy your application's features and then block your app from being able to run on the King's platform.