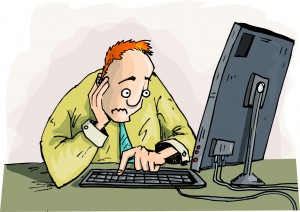 It’s a form of denial. In my recent post on the Office team dissing Windows 8, I noted how the lack of full touch support in Office 2013 undermines Microsoft’s efforts to break into the Post-PC space. And while I expected some push back from the Redmond choir, I was surprised at how many readers seem to be having a hard time accepting the reality of the Post-PC phenomenon.

Simply put, the PC as a technology driver is dead. Yet some people -- most notably, IT professionals who fear the coming BYOD apocalypse -- are determined to prop-up the corpse, slap some lipstick on those rotting lips and pretend that it’s still 2009.

Their core argument seems to center around the idea that, while tablets and other mobile devices are great for content consumption, you still need a PC (or a PC-like tablet device) to get real work done. Unfortunately for them, someone forgot to tell their users.

Look around the tablet accessory aftermarket and you see a veritable cornucopia of add-ons and enhancements all designed to make content creation easier for the Post-PC set. In fact, the very first accessory that Apple made available for the original iPad was that god-awful dock/keyboard thingy. Since then, third-party stalwarts like Logitech have taken on the task of filling the various content creation gaps by offering a plethora of wireless keyboards, mice and other goodies all designed to satisfy the tablet toting crowd’s desire to do more with their devices than merely consume Netflix videos.

It’s this bottom-up push by users seeking to simplify their lives around a single, highly-portable device that is powering the BYOD revolution. The question is no longer “can I”, but rather “why can’t I” ditch my laptop/desktop/boat anchor and just use my <insert generic tablet name here> for everything? It all feels eerily similar to the groundswell of users demanding PCs back in the mid-1980s -- except that this time around, users are willing to shell out their own money in return for the freedom to use a device of their choice.

Microsoft seems to have recognized this trend, which is why the most highly-touted feature of the new Surface tablet is its integrated keyboard/trackpad/magnetic cover. And while the cynic in me would point out that the company had no choice in the matter since its own Metro UI paradigm is so half-baked (many Windows 8 and Office 2013 UI mechanisms are still geared towards a mouse and keyboard), the truth is that Microsoft understands that users will want to consolidate their computing platforms and thus need to be able to both consume and create content with ease.

Which brings us back to those BYOD apocalypse deniers I mentioned earlier. On the one hand, they seek to challenge the notion that users no longer want or need a laptop or desktop PC to “get work done”. Yet in the same breath they point to Surface as the answer to BYOD since it’s an iPad-competitive Windows tablet that will also allow users to “get work done”.

Guys, you really can’t have it both ways. So unless you want to find yourselves on the wrong side of history (think mini-computer loyalists circa 1983), it’s time to stop questioning why users want to bring their tablets to work and instead start figuring out how best to accommodate them in a secure, reliable fashion.