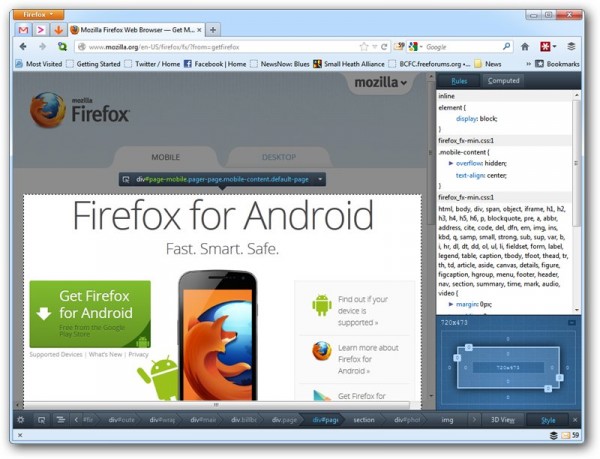 Mozilla has quietly placed major new versions of its open-source, cross-platform web browser and email client onto its download servers ahead of an official release.

Version 15 also introduces a new Maintenance Service for Windows users that’s installed by default, and which ensures all future Firefox updates are delivered promptly. This feature can be toggled on and off via the Options dialog -- select Advanced and switch to the Updates tab.

Developers get a new JavaScript debugger and new Responsive Design View option that allows them to toggle between mobile and desktop views of websites. An additional layout view providing details about the size and shape of an element is now accessible from the Inspector; click the Style button to see the dimensions of the currently selected element, then click the up arrow to reveal more details.

One feature that didn’t make it through to the final release is the inline PDF browser -- although present in Firefox 15 Beta, it appears its appearance has slipped back to version 16. Neither can we confirm the existence of Mac accessibility improvements -- one thing is certain, however, VoiceOver support is not yet available outside of the Nightly builds.

Those users willing to delve into the about:config portion of Firefox will find they can now toggle between showing Firefox’s options in a separate dialog box (the default) and in its own tab in the main Firefox window. Search for browser.prefences.InContent and double-click it to set it to true to enable the feature.

Similarly, the option for setting plugin content on websites to “click to play” still hasn’t been implemented by default; instead users should search for plugins.click_to_play and double-click it to switch it on.

Thunderbird 15 FINAL meanwhile has three major changes of note. The most obvious is the implementation of a new user interface called Australis. This introduces itself immediately with the rounded tabs at the top of the screen, but extends to redesigned lines, a repositioned toolbar and categorized filters.

The unified global search now covers the chat module, which supports Facebook, Twitter and Google Talk among others, while the “Do not track” option introduced in Firefox has been added to Thunderbird too. This option, accessible from the Web Content tab in the Security section of Thunderbird’s Options screen, is of less relevance to email users, but may stop some emails from tracking the user if they’ve signed up for the voluntary code of practice.

From November 12, Thunderbird’s code base will be split into two separate editions: Thunderbird and Thunderbird ESR. See here for details.

Both Firefox 15 FINAL and Thunderbird 15 FINAL are free, open-source downloads for Windows, Mac and Linux.