Get SkyDrive for your Android 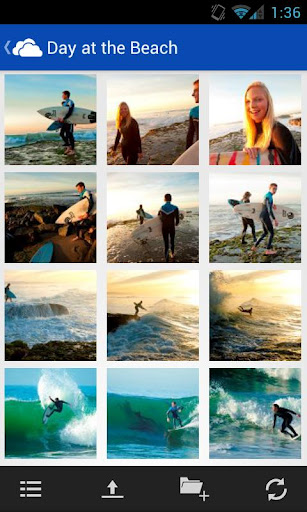 Well, Microsoft certainly took long enough. SkyDrive for Android is now available. I guess it takes nearly 65 percent mobile OS market share for the software giant to notice. Yeah, the wait is over. If you love Android but not Google Drive, or even Dropbox, Microsoft's cloud locker is your ticket.

There's real sense to this belated release. By market share, most everyone using a smartphone will have Android, while those on PCs most likely will have Windows (and likely Office, too). Windows 8 makes Microsoft Account the required identity, which also unlocks services like SkyDrive. But most mobile users will have Android or iOS, which combined mobile operating system sales share was 82.9 percent in second quarter, according to Gartner. Windows Mobile/Phone: 2.7 percent, or just behind Samsung's Bada. So likely lots more Windows 8 users with required Microsoft Account will have Android or iOS than Windows Phone. Hey, late is better than never, right?

For a company which core business is search, Google could do better helping Android users find SkyDrive -- or is it just coincidence the app is so hard to discover? I searched Google Play for "SkyDrive", and (gasp) it's entry 19! I understand that Microsoft's cloud service competes with Google's, but what about talk of there being no in-house favoritism (in this case a penalty) or rule no. 6 ("You can make money without doing evil"). Surely, SkyDrive should be top item searching for, well, SkyDrive. C`mon, Google.

No thanks to Google, perhaps, at least 239 people found the app (that's the number reviewing it). They like it: 198 five stars, with an average rating of 4.7 out of five. Not bad. Matt calls the app "fantastic. One of the best MS apps for Android yet. The UI is native and is a great combination of Holo and Metro. It works really well, I'm pleasantly surprised".

Actually that's a deliberate design decision. "We wanted to ensure we kept the same intuitive design of all SkyDrive experiences while also making use of Android design patterns and conventional interactions, so this feels natural for people with Android phones", Microsoft's Mike Torres explains.

Reviewer Andrew, who has HTC One X: "Much better than Dropbox, app is amazing, easy to navigate and faster than Dropbox. Has thumbnails for images. Yes it rescales the images, but I do a full backup on a separate drive so it's a non-issue. Well done ms. :)"

Geoffrey, a Droid Bionic user, makes my point about Microsoft not having its release priorities right: "If I would've had access to this before I had Google Drive. I would have used it. But most of my documents are now in Google not Microsoft". Uh-oh. Dror, who uses Samsung Galaxy S II, is relieved the wait is over: "Glad to be able to finally take advantage of my free 25GB of storage".

Albin, who has Motorola RAZR, recently "made the change from iOS to Android and this was one of the apps that i was missing the most!! Thanks MS. Now my expirence is complete, I can see my pics on my computer, ipad and my android using my 25 gigs. =)"

While the app can run on Android 2.3 Gingerbread or later, Microsoft says SkyDrive is designed for Android 4.0 and above.

I haven't the time to test the software, so my apologies for there being no first-hand report.

In this post's first paragraph I link to the download from Google Play, and you can see the screenshot above, but do so with uncertainty. After all, as I reported last week, Microsoft issued that DMCA takedown notice for one of our Windows 8 stories -- and we still don't know why. Was it the official photo (like the one above) or link to download site (like Google Play)? Perhaps it was negative comments, which only you can control. Will you give them, or do you have good things to say about SkyDrive for Android?

6 Responses to Get SkyDrive for your Android