Well, hell's bells. Apple sold about as many iPhones as Wall Street expected during second quarter after all. That's the big, glaring takeaway I see from phone sales data Gartner released today. The numbers also show something else: The analyst firm either has really lousy methodology (which I doubt), or Apple apologists have been wrong all along (as I've asserted for years). Gartner reports 28.94 million iPhones sold, to Apple's 26.03 million.

Gartner is the only major analyst firm tracking actual handset sales to end users, while others record shipments into the channel. Apple does the same, although every time Samsung reports smartphone numbers, Apple apologists rush to claim the figures are shipped while calling iPhone's numbers sales. Not so. Apple reports shipments, too, and corresponding revenue, which comes from sales to cellular carriers, other third parties and direct sales. As such, Gartner's numbers rarely reconcile with Apple's, but they're usually lower. For second quarter, they're considerably higher. The difference is significant, and in Apple's favor.

Wall Street consensus was around 29 million iPhones sold during the quarter but Apple came up short by about 3 million units, when reporting financials last month. However, Gartner's sell-through number is nearly consensus and shows much less slowing in sales than previously thought. From a purely financial bean-counting perspective, the difference is immaterial, because Apple reports revenue based on units shipped into the channel, not sold to consumers. Analysts tracking financials will care more about that. But for anyone trying to assess iPhone's health, sell-through matters much more.

Actual sales still fell 12.6 percent quarter on quarter, based on Gartner's numbers, but that's half the decline based on Apple's iPhone shipments. Year-over-year sales growth is stronger: Up 47.4 percent, according to Gartner. The point: iPhone sales aren't nearly as weak as shipments reveal, and it makes sense Apple would ship fewer units into the channel ahead of a new product launch. During Apple's fiscal Q3 earnings conference call, CFO Peter Oppenheimer reported a "sequential decline" in channel inventory.

Still, Apple considerably trails Samsung. The South Korean electronics giant sold 45.6 million smartphones during the quarter, or just over half of its 90.4 million handsets.

"In the race to be top smartphone manufacturer in 2012, Samsung has consistently increased its lead over Apple, and its open OS market share increased to one-and-a-half times that of Apple in the second quarter of 2012", Anshul Gupta, Gartner principal analyst, says.

Year over year, Samsung's sales share rose from 16.3 percent to 21.6 percent of the global handset market. Apple's: 4.6 percent to 6.9 percent. However, sequentially, Apple share fell from 7.9 percent against Samsung share gains (up from 20.7 percent in first quarter). 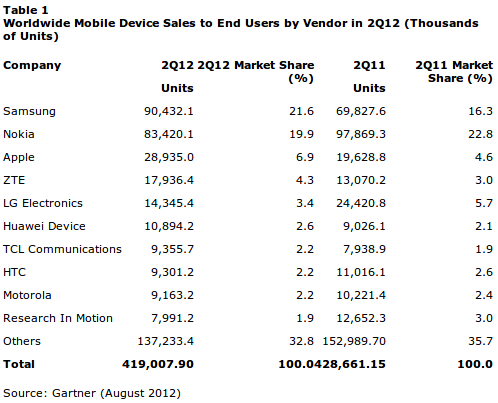 Gartner predicts a big autumn sales whoosh, with Apple leading the way. "High-profile smartphone launches from key manufacturers such as the anticipated Apple iPhone 5, along with Chinese manufacturers pushing 3G and preparing for major device launches in the second half of 2012, will drive the smartphone market upward", Gupta says. However, feature phones will continue to see pressure". 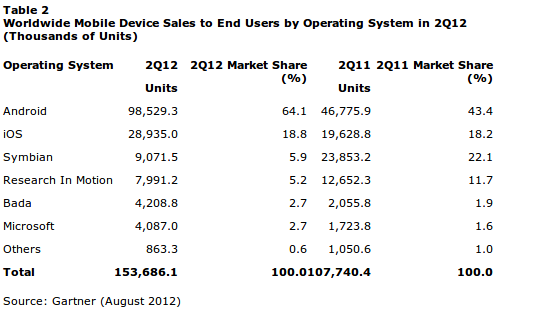 The point: While iPhone sales are much better than Apple shipment data reveals, Android is unstoppable.