Motorola: Big batteries, skinny phones, and $100 back if you don't get Jelly Bean 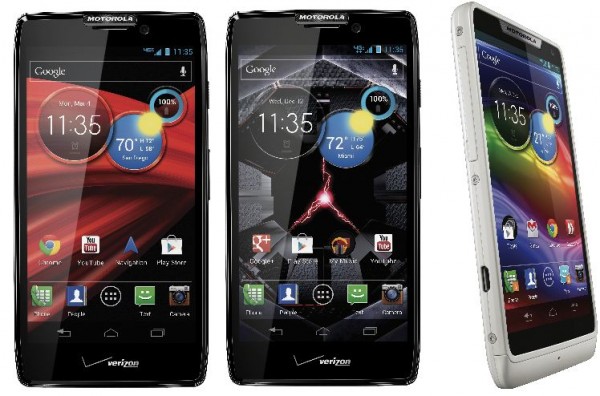 The Droid Razr HD has a 4.7" Super AMOLED display, a 1.5 GHz dual-core processor with 1GB of RAM, Verizon 4G LTE/3G WCDMA connectivity, an 8 megapixel camera and 1.3 megapixel forward-facing chat cam, 12GB of onboard storage and a 2530 mAh battery.

The Droid Razr Maxx HD is similarly equipped but beefs up the storage and battery life. It also has a 4.7" display, 1.5 GHz dual-core processor with 1GB of RAM, LTE/WCDMA connectivity, 8 Megapixel/1.3 Megapixel camera configuration, but it comes with 26GB of onboard storage and a whopping 3300 mAh battery that promises up to 32 hours of mixed usage.

Droid Razr M is the odd man out, but a star in its own right. It offers a smaller 4.3" Super AMOLED screen, but the design is almost "edgeless." The screen bezel on the edges of the device are so small that the screen appears to go all the way to the edge. It has a 1.5 GHz dual core processor with 1GB of RAM, 4.5GB of storage plus microSD, LTE/WCDMA, an 8 Megapixel rear camera, and a 2000 mAh battery. The Droid Razr M is the only device that was announced today that is also available for pre-order today. On Verizon Wireless' site beginning at 5pm Eastern Time, the Razr M will be available for $99.99. The other two devices are expected to be available "before the holidays," with no pricing announced.

10 Responses to Motorola: Big batteries, skinny phones, and $100 back if you don't get Jelly Bean