New Myspace: gorgeous, but who will use it? 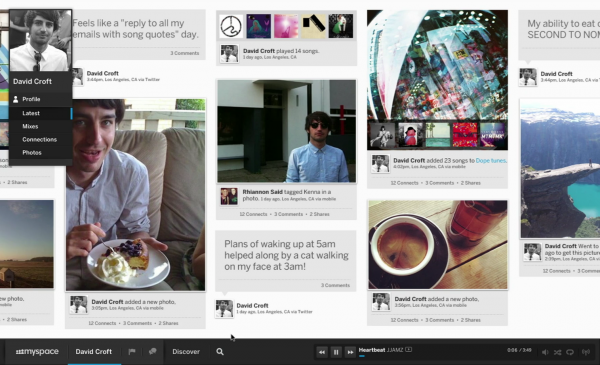 Let's be honest, the news that Myspace is being revamped probably doesn’t have you jumping for joy and punching the air. In fact, I expect your response is probably similar to mine -- a little bit of interest mixed with a lot of "so what?" Myspace was the number one social network in the days before Facebook and Twitter, but now it’s a faded and largely forgotten web presence used by people who should have let go and moved on a long time ago.

But before you dismiss the revamp entirely, as I nearly did, it’s at least worth watching the teaser video Myspace just released because, as it turns out, the completely rebuilt service is beautiful, glossy and -- rather surprisingly -- it might just have you wanting to try it out. I know. Using Myspace! What's next, lobbying Yahoo to bring back GeoCities?

The new site, which still focuses on the media side of things, clearly borrows design ideas from other social networks, most notably Pinterest, and that’s no bad thing. The video shows using the service to be a slick and intuitive experience, but we’ll have to wait until it launches to find out for ourselves. There’s no word on when that will be just yet, but it’s likely to be this side of Christmas.

The god-awful My____ logo is gone, replaced by a simple, modern (and Microsoft-styled) design, and while the site aims to appeal to content creators like musicians, filmmakers, photographers and designers, it also targets their followers with features like "This week’s Top Fans" map which plots follower locations and includes stats like gender percentages and average age.

How well the new Myspace does will really depend on whether it can draw enough big-name celebrities away from Twitter, Facebook and Google+ and persuade them to offer something that fans can’t get elsewhere. The fact that Justin "Sean Parker" Timberlake is a big investor could help here.

Ultimately, as lovely and as slick as it might turn out to be, Myspace has a big problem and it’s an obvious one. Most people already have enough social networks consuming their time. As Google+ shows, you can offer users everything they could possibly want, and it still might not be enough to draw them in.

Of course time will tell. What do you think? Are you pumped for the return of Myspace or do you think JT and co. are just flogging a dead horse. Let me know in the comments below.

Oh, and if you were wondering, the rather nice song that plays in the background of the Myspace video is Heartbeat by JJAMZ.

20 Responses to New Myspace: gorgeous, but who will use it?