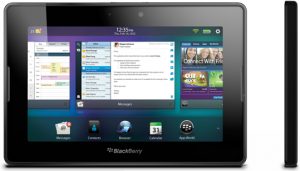 PlayBook may be more than one-and-a-half years old, but that isn't stopping Research in Motion from improving the aging tablet: BlackBerry PlayBook OS 2.1.

The update focuses on business users, which is underlined by a number of new features, such as Print To Go across Wi-Fi networks that allows users to transfer documents from a PC to a BlackBerry Playbook even among different networks, Folder and Sync Management permits individual synchronizing of ActiveSync-connected folders within an email account or OTA (Over the Air) enrollment with BlackBerry Mobile Fusion for directly pushing email, Wi-Fi, VPN profiles or enterprise apps to the tablet by IT administrators.

Since Android applications are allowed to run on BlackBerry PlayBook OS, the latest update also brings along improvements to the Android runtime. In-app payments, support for HD cameras and multi-window applications are included, the latter is touted to improve multitasking.

Tablet setup no longer requires Wi-Fi and adds new IT policies through BlackBerry Mobile Fusion, such as full device encryption and disabling of development mode for enterprise-connected tablets and ActiveSync Certification Management.

The update is currently available for the standard model and within the month for 4G LTE BlackBerry PlayBook, subject to carrier approval.