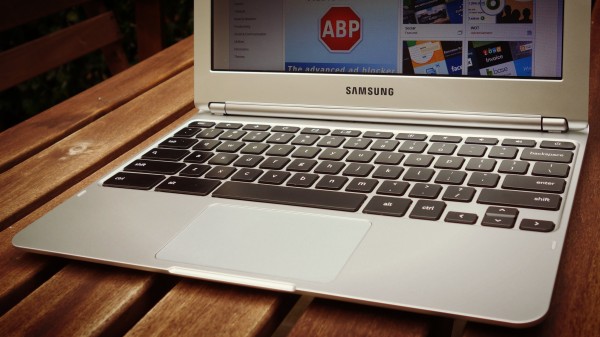 Somebody believes Google's marketing claim that the $249 Chromebook is "for everyone". Just five hours ago, I reported the device's availability. It's not anymore. A spokesperson confirmed this evening that Google Play sold out of the portable during its first few hours of availability "with more stock coming soon".

Google introduced the new Chromebook, which uses ARM processor rather than x86 processor, on October 18, with pre-orders starting same day. What's different today: Google selling the portable direct from the Play store, alongside Galaxy Nexus and Nexus 7. Samsung manufactures the portable, which shape, 11.6-inch screen and overall size resembles Apple's MacBook Air. But Google makes a value push, by selling a computer with similar benefits for one-quarter the price.

Stated differently: You could buy four ARM Chromebooks for the price of one MacBook Air. Looked at another way: A small business could buy direct from Google a smartphone ($349 Galaxy Nexus), tablet ($199 Nexus 7) and laptop ($249 Chromebook) and still have $200 left compared to the price of Apple's entry-level laptop.

Of course, we don't know how many ARM Chromebooks Google stocked. But given the marketing push -- two page ad in Friday's New York Times being example -- the search giant surely prepared some early sales rush. Then there is the price, which I stated in my first-impression review as devastatingly appealing -- all but irresistible. It's almost a no-brainer "yes".

What's most surprising to me, is the interest. No one could accuse BetaNews readers of being Google lovers. Three days ago I asked: "Will you buy $249 Google Chromebook?". Surprisingly, among the 1,474 respondents, only 51.96 answered "No". I expected a much higher number, considering what Chromebook represents. The computer is designed to be always connected, relies almost completely on cloud applications and services and doesn't run Microsoft Office. Different often doesn't sell. But then there's the price, which makes taking a chance, if nothing else, appealing.

Among respondents, 12.96 percent said that they have or will pre-order, with another 19.81 percent planning to purchase within 3 months. Buying polls are never reliable. What people say they want to do often isn't what they do. However, if even a fraction of the one-third of respondents bought (and kept) $249 Chromebook within the first three months, the cloud computer would be huge success. Remember, Google isn't making a volume play, particularly with Windows 8 launching this week, but one of expanding mindshare. Chromebook is at this juncture more about advocating a different digital lifestyle.

BetaNews reader IT advisor is "thinking about buying one". He continues:

I'll keep my desktop machine at home for heavy computer tasks. But the Chromebook looks appealing to take on the road. When traveling, I just need basic features. Mainly email and web browsing. For this, the cheaper ARM-based Chromebook would be better suited than the x86 version, as the ARM one has longer battery life.

At $249, you wouldn't need to insure it if you went traveling, as it's not the end of the world if you lost or broke it (besides, all your documents would be in the cloud). The keyboard would suit anyone who touch-types, as tablets aren't very suitable for fast 10-finger typing.

Aaron Hurt: "It's absolutely at the right price point. I've been using an Eee PC 901a as a Chromium laptop just for the couch or in the car and it was 'usable' but not very functional. I've already bought into the entire Google Ecosystem and this just makes sense. It should be a fantastic complimentary system to my Nexus 7 and should be more useful for school work on Google Docs/Drive. I'll be in for one, maybe two if my wife steals mine".

Web designer Spike Pecan has "owned and loved for more than a year -- is not designed to do the same things. It is designed for web access, and cloud-based applications and storage. I have NEVER found myself wishing I could design vector-based objects on my Chromebook, any more than I would think my cell phone is deficient because I can't run Photoshop on it. The Chromebook does what it is supposed to do, and it does these things extremely well. Kudos to Google and Samsung for changing the rules of the game. Cloud-based access is the future, like it or not".

28 Responses to Chromebook sells out