Microsoft releases Xbox SmartGlass 2.0 for iPhone and iPad -- get it NOW! 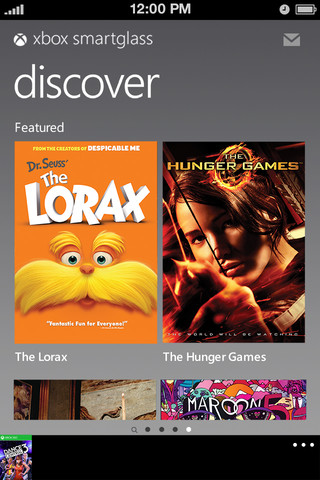 Two weeks ago Microsoft announced Xbox SmartGlass with app availability on major platforms. Following the initial release, the company introduced an updated version of Xbox SmartGlass for the iPhone and iPad.

Just like with other platforms, Xbox SmartGlass 2.0 for iOS allows Apple-branded smartphones and tablets to connect and interact with an Xbox 360 console. The app can remotely control the game console, using the touchscreen interface, allowing one to resume, rewind or advance content like videos and music.

Apple iOS devices are no stranger to gestures, and the new Xbox SmartGlass 2.0 takes advantage of the capability by implementing swipe and tap. Both are introduced in order to navigate the Xbox 360. The touchscreen keyboard from the iPhone can be used to type to the Xbox 360. The changelog doesn't mention the same for the iPad, which may be an oversight considering that users can browse the Internet on the console with keyboard and zoom support.

Curious enough Xbox SmartGlass 2.0 doesn't play well with the iPhone 5. A number of commenters took it to heart and low-rated the app. chandiaswilmer says: "So you make a huge update and don't add support for the iPhone 5? Come on now," while at the moment two others share the same sentiment.

Using the app the Xbox catalog can be searched in its entirety for music, video and games. For the competitive users (and who isn't at least at some level?) the updated version allows users to track and compare achievements with Xbox friends and send them messages. The profile can be edited and the 3D avatar changed as well, using the Xbox SmartGlass 2.0 app for iPad and iPhone.

5 Responses to Microsoft releases Xbox SmartGlass 2.0 for iPhone and iPad -- get it NOW!