Microtransactions are not the American way, says new data 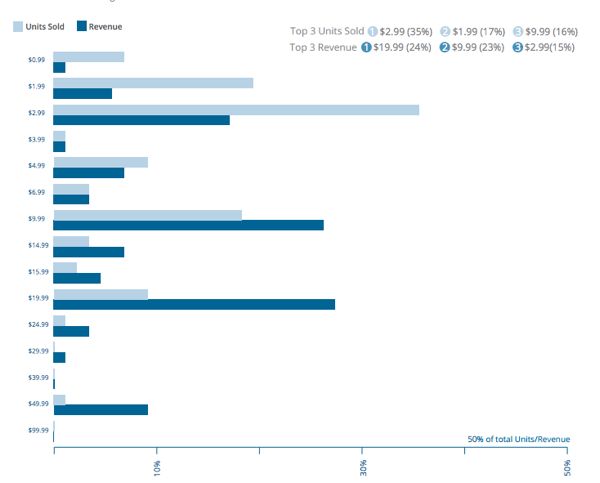 A new report from app monetization company W3i says users 47 percent of the revenue earned from in-app purchases falls in the range of $9.99 to $19.99, somewhat disrupting the theory that a constant stream of tiny "microtransactions" is a viable profit model for mobile video games.

The "freemium" profit model has been immensely popular among mobile video game companies. It has been shown that mobile games earn more money when they are given away for free, but contain add-ons available only through in-game purchases.

Early in the development of the freemium model, it was thought that so-called "microtransactions" (in-app purchases of between 99 cents and two dollars) were an anchor for steady income.

Data from Flurry analytics last year began to reveal that microtransactions really weren't driving much revenue. Instead, five to six percent of the total userbase of freemium games was driving all the revenue.

W3i's data sheds further light on this topic by revealing that this generally small base of paying users is simply spending more. The hope that millions of people will spend small amounts of money in a game looks like a pipe dream for game developers.

However, this is not a global trend.

"Although the U.S. learned about freemium gaming from Asia, it’s apparent that Americans are taking their own approach to it,” Robert Weber, co-founder of W3i said in a statement on Thursday. "Where mobile games in Asia still depend on microstransactions, U.S. gamers play more like whales- spending larger amounts of money in mobile games."

These "whale spenders" are actually most commonly found in the UK, where as much as eight percent of in-game revenue in October 2012 came from $49.99 in-app purchases.

Where are all the microtransactions taking place? W3i says the largest volume is in China and Canada, where they make up approximately three percent of all in-app purchases.

This report highlights the importance of a regionalized monetization strategy for international mobile app and game developers. For the American and British markets, massive in-game purchases will do better than they will in Canada and China. In markets such as the United Arab Emirates, a higher number of users make in-app purchases, but they all typically gravitate toward the $10-$20 range.

2 Responses to Microtransactions are not the American way, says new data