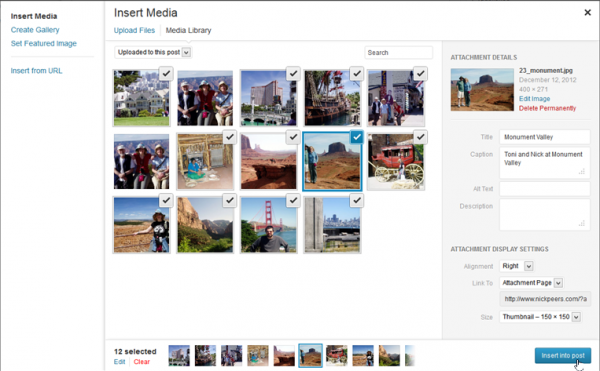 Popular open-source blogging CMS system WordPress 3.5 has launched. The system, pre-installed with many hosting packages but also available for direct download, shows off a brand new media manager and simplified default theme as its most noticeable improvements.

The update also becomes Retina-friendly for the first time, debuts a number of accessibility and interface tweaks, and provides a number of under-the-hood tweaks aimed at blog developers.

WordPress 3.5's eye-catching new feature is its redesigned media manager. Version 3.5 also debuts a new default theme for new WordPress users in the form of Twenty Twelve. Described by WordPress as "simple, flexible, and elegant", Twenty Twelve utilizes an Open Sans typeface and design that’s tailored to work on a multitude of different devices, including tablets and phones. Twenty Twelve has also been built with flexibility for building entire WordPress-powered websites as well as simpler blogs.

The WordPress dashboard -- where users administer their blogs -- has been updated to take full advantage of high-resolution screens on devices including the MacBook Pro with Retina Display, iPad and Kindle Fire HD.

Other minor refinements are less to do with pure aesthetics and more to do with improving accessibility. Various screens and controls have been redesigned, including a more advanced color picker tool, while the whole system has also been made more accessible with an emphasis on those accessing WordPress through modern interfaces such as touchscreens, screen readers and other mouseless workflow scenarios.

Finally, developers will be pleased to see a number of significant under-the-hood updates, such as support for meta queries, multisite improvements, better performance when using post objects, and a tweaked imaging editing API that uses ImageMagick when available. Support has also been extended to a number of additional libraries, including Underscore and Backbone JavaScript libraries, while others -- including TinyMCE and SimplePie -- have been updated to cover the latest versions.

WordPress 3.5 is a free, open-source download for Windows and Linux. A supported web hosting package is also required. Also available are WordPress for iPhone and iPad and WordPress for Android.