Microsoft counts down to what? 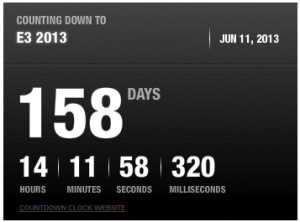 Perhaps you're thinking about Consumer Electronics Show 2013 and all the goody gadgets set there to debut. Microsoft isn't, having pulled out of the event (and that includes the big kick-off keynote). The company instead looks ahead to E3 in, ah, June, with Major Nelson (aka Larry Hryb) posting a countdown clock. Easy speculation is to the next Xbox, but don't choke up with excitement just yet.

CES keynote is exactly where Microsoft chief exec Steve Ballmer would unveil Xbox 720 (one of the rumored names), only to make everyone wait until November to get it. E3 debut simply means later announcement and likely holiday shipping, which is consistent timetable for Microsoft consumer products. When could you get Windows Phone, Xbox Kinect or Zune? Early November, baby. So consider that countdown clock just a wicked teaser -- like Lucy yanking the football out from Charlie Brown or Wile E. Coyote chasing the Road Runner off a cliff. Xbox 720, or whatever Microsoft calls it, won't be there in 158 days.

Still, Hryb's countdown clock is a brilliant marketing gimmick in the lull ahead of CES, sure to draw lots of attention and to generate blogs or news stories (like this one). Tsunami is best analogy for the days leading up to CES. Suddenly, the ocean of gadget news disappears then pours back in a title wave of announcements -- often for stuff not actually available until much later in the year. I hate CES, and Microsoft was right to pull out.

The questions for now: Microsoft counts down to what? Is it the new Xbox? Something else? Do you care? What do you want from the next game console? Comments await your answers.

10 Responses to Microsoft counts down to what?