Is the Lenovo Chromebook right for education? 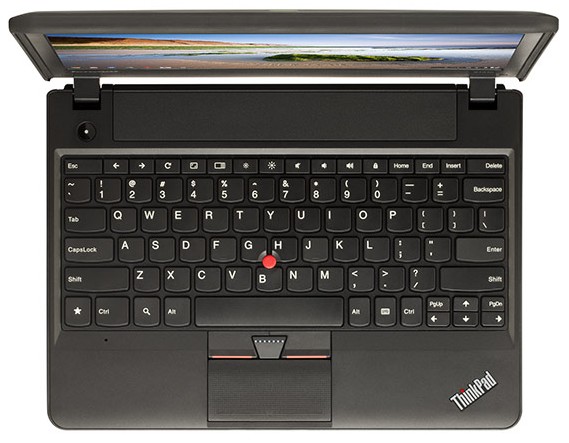 That's the question we're asking in the newsroom, and the consensus is "No", and that most certainly is my initial reaction. But on further examination, I'm at "depends", meaning for some schools but not for many others. Here size of school district matters, because Lenovo commits considerable extra IT-oriented resources to this newest ThinkPad that should appeal to people managing larger-scale deployments. But smaller schools, such as charter, private or small town, should consider spending less on another model.

Before continuing, let me preface: I am a Chromebook fan, and the $249 Samsung ARM model is my primary PC. But I don't write stories to suit my personal preferences but follow the reporting. Let's put this new ThinkPad into plus-and-minus columns.

On the plus side:

1. Google and Lenovo refer to the X131e as "rugged", which, if true makes the Chromebook a better choice among many for the price ($429). There are rubberized bumpers, for example, and Lenovo says the hinge is rated for 50,000 openings/closings.

"With the rugged features we added to the X131e, we’ve seen reduced failure rates in the field", Jerry Paradise, Lenovo executive director, claims. "This is a huge benefit to schools and students. We’re pleased to be able to offer this hardened ThinkPad Chromebook as a great computer for schools".

3. ThinkPad is a brand IT administrators trust. Lenovo maintained and even extended the brand's integrity after buying IBM's PC division. I assert this from ongoing conversations with IT managers.

4. Bid-pricing is available, so that $429 price isn't set in stone. But I expect larger schools will benefit more from this option, simply because of volume purchases.

5. Battery is 6.5 hours -- or so Lenovo claims, which is good enough for the school day.

6. Expensive Microsoft Office license isn't required. Like its competitors, ThinkPad Chromebook comes with Google Apps for Education and all the management features common to Chrome OS, such as seamless updating and ability to move a student from one machine to another simply by logging in (settings, apps, etc. migrate automatically).

On the minus side:

1. The X131e is pricey, well, compared to several other Chromebooks. I would chose the $249 model over any other. Are the Lenovo and ThinkPad brands and some extra ruggedness worth an extra $200 per unit? Do the math. A charter school or small-town district could spend $24,900 or $42,900 for 1,000 Samsung or Lenovo Chromebooks, respectively. How would you rather spend your money? 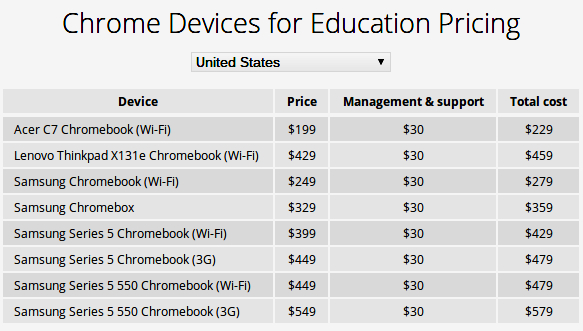 2. Google marketing creates a price perception problem. During the holidays, teachers could get an Acer Chromebook for 99 bucks. Meanwhile, advertisements for $199 Acer and $249 Samsung models are everywhere. How does Mr. IT Manager justify $429 to a Superintendent who would need to live on Mars not see Google's "For Everyone" marketing?

4. The Lenovo Chromebook is really a Windows model re-purposed and confusingly so because the model numbers are the same. The Chinese computer manufacturer offers AMD and Intel X131e laptops also for schools (prices start at $539 and $619, respectively). The base Intel Windows model has 1.4GHz Core i3 processor and 4GB of RAM, but there's no guarantee Lenovo will be this generous.

You could view Chromebook based on Windows model as advantage -- as being tried-and-true design. Certainly the approach allows Lenovo to better differentiate from competing Chromebooks, but with trade-offs (see #5).

6. You can't get yours from Google or purchase one at retail -- Lenovo sells the computer direct. ThinkPad Chromebook will be available to businesses as well as educational institutions, however.

ThinkPad Chromebook is the lowest-cost educational X131e Lenovo offers. But it's a price premium compared to other new models and runs counter to Google's recent marketing push positioning Chromebook as the more affordable, higher-value alternative to OS X or Windows laptops.

For the price, I wonder if most schools should consider a tablet instead. Touch is the future, and Lenovo's Chromebook has none of it. Shouldn't kids use now what they will need in the future, and doesn't touch better foster creativity? If true, is Chromebook or any traditional laptop right for schools? Locally, San Diego Unified School District scarfed up 25,000 iPads to replace its fleet of Windows netbooks, which have lots more in common with Chromebook.

Would you buy the Lenovo for your school?

28 Responses to Is the Lenovo Chromebook right for education?