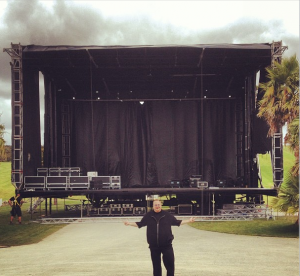 Like it or not, the New Zealand-based entrepreneur Kim Dotcom continues to make headlines thanks to his latest project, Mega. The cloud storage service launches on January 20, and merely days before the big opening Dotcom revealed that Mega will indeed be mega in the storage department.

In a Twitter post, Kim Dotcom said that Mega will offer "generous limits for free [plan] users". But just how much is "generous"?, you may ask. The soon-to-be-introduced service will give users a whopping 50GB of free cloud storage, matching MediaFire's offer, and top established market competitors such as Box, Dropbox, Google's Drive and Microsoft's SkyDrive. Basically if there's a "box" or "drive" in the title, then it's not as "roomy".

Dotcom looks prepared for the January 20 opening, judging by a recent Twitter post and Instagram pic which shows him standing in front of the stage where he, and likely other guests, will introduce Mega to the public. Seeing as the man is quite popular, and controversial on the interwebs, and regularly manages to make a splash, the new cloud storage service looks set for a highly debated start.

Dotcom has yet to comment on whether dedicated mobile apps will be available for the new Mega. He's also kept quiet as to what the implied paid plans involve, but seeing as the service provides 50GB of free storage it's not out of this world to consider that there will be much more on offer for those willing to take out their wallets.