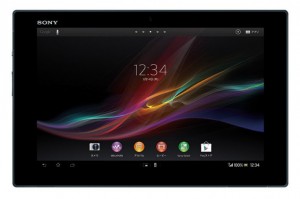 Following the new smartphone flagships introduced at CES 2013, the Xperia Z and Xperia ZL, Japanese Android device manufacturer Sony has unveiled the successor to its Xperia Tablet S slate. Dubbed the Xperia Tablet Z, it sports a dust-proof and water-proof shell, and a lightweight and thin form factor.

The Xperia Tablet Z comes with a 10.1-inch display with a 1920 by 1200 resolution (known as WUXGA), backed by Sony's Mobile BRAVIA Engine 2 technology. The panel features a 16:10 aspect ratio, an interesting choice seeing as how Sony's own recent smartphones feature the narrower 16:9 aspect ratio for each of their respective screens.

The tablet is powered by a 1.5 GHz quad-core processor, likely a Qualcomm Snapdragon S4 Pro unit, and ships with Android 4.1 Jelly Bean out of the box. One of the most noteworthy details is 4G LTE connectivity. The Xperia Tablet Z also features an 8.1 MP back-facing camera and NFC (Near Field Communication), the latter of which is touted to work with Xperia smartphones.

Weight and thickness come in at a rather impressive 496 grams and 6.9 mm, respectively. The Xperia Tablet Z will ship in black and white and will be available in the Japanese market this Spring.