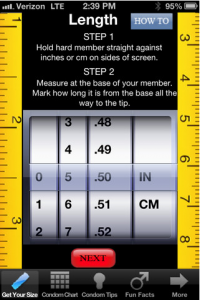 Apple used to be quite picky about what apps it let through into the App Store, but it’s relaxed the rules in recent times, and now we’ve reached the point where an app that lets you measure your member and see how you compare in the length and/or girth world rankings is perfectly fine.

Condom Size bills itself as an educational app designed to help users determine the proper condom size they need. It also includes educational tips, fun facts about condoms, and more.

Measuring length involves pressing your erect penis against the side of the screen while girth requires the use of a piece of string. When you’ve finished measuring, the $0.99 app will tell you the condom size you need, recommend a make and brand of prophylactic, and tell you how you compare for length and girth in the world. It helpfully points out that above 100 percent means you are larger than average and under 100 percent means… well, it’s not the size that counts, right?

Naturally the world ranking tables are not to be taken too seriously as it’s just possible users may have, ahem, massaged their measurements a little.

Apple’s store policy -- what is and isn’t allowed -- has always been a bit hit and miss and apps are occasionally pulled after being approved, usually in the wake of unfavorable reports in the press. Popular photography app 500px, which had been available since October 2011 and downloaded almost a million times, was removed from the App Store by Apple earlier in the week after customer complaints over "possible child pornography".

Since Condom Size contains no images, and is essentially just a measuring and education tool, it’s likely to be allowed to stay in store, for now.

Editor's Note: Android users can measure up, too. The app debuted on Google Play last year. Who says the best apps are developed for iOS first?