Google Keep -- for notes, memos and ideas best kept in the cloud 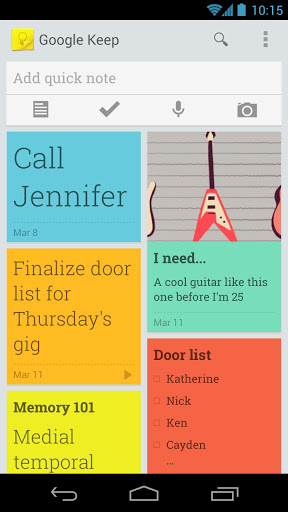 Confession: I've never used Evernote, much to the abash of colleague Alan Buckingham (or so he expressed in group chat a little while ago). But I would use Google Keep, which released today. Russell Holly calls Keep "the not-quite Evernote clone" -- for anyone making bold comparisons.

You tell me. Does this sound familiar, Evernote and OneNote users? "With Keep you can quickly jot ideas down when you think of them and even include checklists and photos to keep track of what’s important to you", Katherine Kuan, Google software engineer, says. "Your notes are safely stored in Google Drive and synced to all your devices so you can always have them at hand". She adds: "If it’s more convenient to speak than to type that’s fine -- Keep transcribes voice memos for you automatically. There’s super-fast search to find what you’re looking for and when you’re finished with a note you can archive or delete it".

Other features include color-coding (something geeks seem to like, right), swipe to archive, and note-to-checklist conversion. Users of Android 4.2 or higher also can keep Keep as a homescreen widget -- for when the idea is immediate and you need to express it fast or forget.

Device sync, dictation capabilities and Google Drive integration are the three features that pique my interest. Whether or not I actually keep Keep beyond initial testing is yet to be seen. Evernote didn't grab me.

I started writing this post at 4:53 pm EDT, when there was one review of the app on Google Play. Fifteen minutes later there are 179 -- 147 of them five stars.

"Finally!" expresses Galaxy Nexus user Yuriy Melnik: "A native note/to do app is long overdue, a bit surprised to see no Google Tasks sync? This would be nice".

Michael Bau gives three stars and expresses disappointment: "This app is just a plain app to take notes. You can record audio notes, include pictures, and write text with your keyboard, and make lists. That's pretty much it. Other than that I would love to see a way to add deadlines and alerts to notes, and some kind of drawing support. I would love to replace Wunderlist with Keep, but it's not quite there yet".

Aaron Carvalho gives five stars, but asks for more, too: "Simple and neat interface. Easy to use. Very beautiful UI. I just wish it had the option of adding pictures from the gallery as a note. So far only option is to take a picture with the camera. Now let's just hope it stays live".

Nathan Burke and I share similar experience. "I can take a photo, add a list, create a note, but when I try to view anything on Chrome, I just get an error, and it keeps reloading", he expresses. I have the same problem. What a crock! Error on Chrome. Google's browser. For shame!

Matthew Kelly has "Keep on both the Nexus S and Nexus 7 devices is working well on both. Helps to be an Android 'ecosystem' user, and I'm eager to see how easily it extends into my Google Drive. Fast sync, easy to add images and quickly type content. Will try the dictation/transcription feature, as it will be a significant addition to the Google cloud toolkit. Excellent application with no issues thanks to its simplicity!"

Sentiments are a little different elsewhere, if the first comments to the above YouTube video indicate anything.

And you? Will you do Google Keep, or keep the note app (if any) you already use?

11 Responses to Google Keep -- for notes, memos and ideas best kept in the cloud