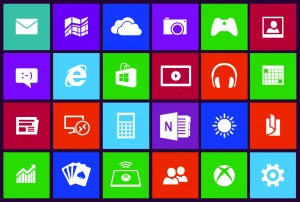 A few days ago, cloud-based PC management service Soluto released a study into the habits of 10,848 Windows 8 users, and found that consumers really aren’t running apps all that regularly on the new operating system.

According to Soluto, "on average, a Windows 8 user will launch a Metro app 1.52 times a day. Tablet users launch the most Metro apps at 2.71 times per day".

Soluto also found that among desktop and laptop users, 60 percent of people launch an app less than once a day. Presumably the only tile they click on the Modern UI is the one that takes them through to the desktop. Or maybe they have a third-party Start button installed and don’t ever see the new UI.

I use Windows 8 for at least eight hours a day, five or six days a week, but I’ll admit I can often go for very long stretches without launching a single app. Although I have the free Adobe Photoshop Express installed in the Modern UI, I’ve only ever used it once. Even for simple tasks I prefer to launch the actual Photoshop from the desktop. I might not need anywhere the power it offers, but it’s good to have it on hand.

And once I’m working on the desktop, I have no real need to go back to the Start screen because I have a browser window with likes of Outlook.com, Facebook, and Google Reader permanently open in tabs, on my second monitor.

The Windows 8 app experience often isn’t a great one truth be told. Lots of apps are just websites presented differently or cut down versions of better programs. The few occasions I’ve used the Modern UI version of Internet Explorer I’ve felt as if it’s designed for people who don’t really use the web much.

Low app usage, coupled with the lack of big name apps, is clearly a problem for Microsoft. And it’s a vicious circle. Lack of official apps, leads to lack of app use, leads to the lack of official app creation. Certainly, in the case of Windows 8 on the PC, there isn’t a great need for apps based on websites, when you can fire up the actual website and get the full experience. And not all apps need clicking on anyway -- sometimes the information that appears on a live tile is all you need at that moment.

Soluto’s survey also found that most of the apps people were using were the ones supplied with the operating system. Out of the top 12 the most tried and used apps, all bar one (Netflix, at number 8) were from Microsoft. (Just as an interesting aside, Soluto found the most engaging app was Yahoo Mail -- the company’s reasoning for this is Yahoo mailers find it easier to use the app than work out how to set up their mail in Windows 8).

So we’ve got a lack of official apps, people mostly using the ones baked into Windows 8, and a vast proportion of users just not bothering with apps at all. Which clearly isn’t good news for Microsoft -- if Soluto’s findings are reflected across the entire Windows 8 user base, that is.

Many of the BetaNews audience are Windows 8 users, so I’d find it interesting to hear your views on the app situation. Do you use apps regularly (and if so, how often and which ones) or do you tend to bypass them altogether? Comments below please.

99 Responses to Microsoft has a huge Windows 8 app problem