Nokia gives '41 million reasons' to care about its press event -- what do users really want to see? 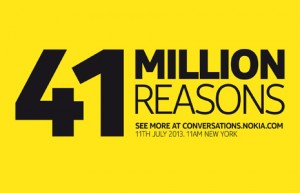 Nokia must be quite confident in what will be unveiled at its upcoming press event, held in New York on July 11, because the Finnish maker just touted "41 million reasons to zoom in" on the webcast.

Sadly (as I really wanted to see the complete list), Nokia only wrote about a paltry seven of them on its blog. Either the company has employed someone very bad at counting or it is not doing a very good job at being subtle. Somehow I doubt the former is true, so that (only) leaves the latter up for debate. Nokia followers chimed in, revealing their expectations for the upcoming press event.

There is a lot of hype surrounding a rumored Nokia handset -- a Lumia variant of the older 808 PureView -- and, naturally, many users have vowed their interest in the alleged new smartphone. Coincidentally (or not) the 808 PureView features a 41 MP camera (with 41 million pixels).

Milorad, one of the first followers to respond, says: "EOS comming [sic], 41mp camera, thanks for the hint". "Good luck Nokia, my 808 and I are keen to see EOS :-)", says David Dble D Kelly-Durrant. But Kevin claims to know more about the event: "I can't wait!! There is more coming than just simply slapping the 41mp 808 camera into a Lumia device here!"

Some users have also expressed their interest in more mundane features. Quad-core processor, microSD card slot and 2 GB of RAM are just a part of Laurence Smith's wishlist, while user supermitra concludes that "Nokia should really include an SD card slot in every device". dNs only wants "two things: the same sound recording quality as 808 and 120fps videorecording [sic] @480p".

What do you want to see?