I was, uh, wrong: Chromecast does what Google claims 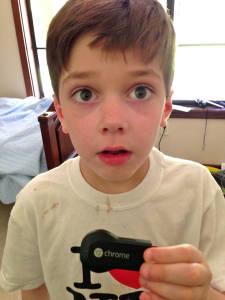 A couple weeks ago when Google introduced its Chromecast HDMI dongle I wrote a column wondering whether it was really such a good product or simply good demoware? Now that I have my own Chromecast and have been playing with it for a few days I have to admit I was wrong. Chromecast appears to be every bit as good as Google claims. That’s not to say it’s perfect (more below) but pretty darned good.

What I really doubted was Google’s claim that the Chromecast could turn on your HDTV, switch the HDMI input, and throw content onto the big screen all in one seamless succession of events. It wasn’t that any of these tasks were especially difficult to do, but that to do them all on every HDTV would require more remote control capability than I knew existed in any current device.

When I got my Chromecast at first it looked like my suspicions were confirmed. Though it could switch the HDMI input, for example, it couldn’t turn on my TV, a very nice 60-inch LED model from Sharp. Close but no cigar.

Then I had one of those moments that prove I have no life: I awoke in the middle of the night with the realization that my problem was powering my Chromecast from one of the Sharp’s USB ports. When the TV is off those ports are dead so there was no way the Chromecast could know I wanted to turn on the TV.

Sure enough, once I replaced the TV USB port with a separate power supply the Chromecast was on all the time (in idle it consumes almost no power) and reliably turned on the TV and switched the input every time I threw to the TV a new episode of Merlin, the boys’ current favorite TV series.

If you have young sons, watch Merlin.

Best of all in our household, as long as your phone is around you can’t lose the TV remote control.

What’s not so good about Chromecast is its total reliance on Wi-Fi. This makes good sense, but the video performance can only be as good as your Wi-Fi signal and Wi-Fi at my TV isn’t very good at all. Wi-Fi engineers who specialize in consumer electronics have told me they really can’t rely on more than about 10 meters of range.

Of course you get far more than that, Mr. Smartypants, I’m just repeating what I’ve been told by people who design this stuff.

One thing to remember is that Chromecast in its present incarnation doesn’t actually stream video from the phone or computer controlling it. Rather the phone or computer tells Chromecast to stream the video from Netflix or YouTube. This led Cole to wonder what would happen if we turned off my phone that had initiated the stream? Nothing happened. Once started the video stream kept on streaming.

Cole was disappointed, however, that he couldn’t stream directly from his phone or computer everything on his screen, effectively using Chromecast as a second screen enabler. Cole’s not the only one who wants that capability, which I’m sure will come in time, though for the moment Google seems to have forbidden it.

At $35 the Chromecast is a wonder but at $0 it would be even better and I am pretty sure that’s where Google is heading, following the example of Android. This is one of the best implementations yet of a smart TV and I can’t believe that Google won’t license it for free to TV manufacturers. Why bother to develop your own smart TV capability when Google will do it for you for nothing?

But of course to get quick market penetration Google needs to address the installed base of HDTVs and that’s where the current Chromecast dongle comes in. I just wish it had RJ-45 Ethernet.

The only mistake I can see Google having made with Chromecast, other than the lack of Ethernet, is that HDMI logo printed on the Chromecast case. That means Google has joined the HDMI Consortium, a trade group dedicated to promoting the standard and policing its implementation.

It’s this latter job -- policing the implementation -- that I think will come back to bite Google on the ass. By joining the HDMI Consortium, you see, it's promised not to hack HDMI encryption, not to letterbox or do video overlays -- the very things Google as an advertising company would naturally want to do in order to turn Chromecast into a huge money machine. With those capabilities Google could in a very practical way sell its own commercials to run with The Big Bang Theory, all without having to pay a penny to Chuck Lorre or CBS.

How un-Google-like to have signed away that right.

Could Google have found a loophole?

16 Responses to I was, uh, wrong: Chromecast does what Google claims