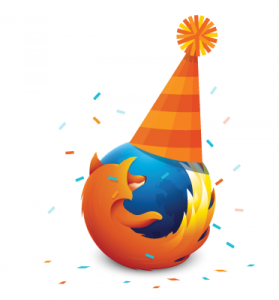 November 9, 2004. The date may not mean much to you, but it was rather big in the land of Mozilla. It wasn't the 'start' of the Firefox web browser, but it was the official ship date of version 1.0. That makes today a birthday celebration for the browser that dared to take on the Internet Explorer-giant.

"In the nine years since we first launched Firefox, we have moved and shaped the Web into the most valuable public resource of our time", the organization announces.

You may not get a slice of cake for the big celebration, but Mozilla is offering up what it calls "nine of our favorite gifts we’ve given the Web over the past year".

Mozilla proceeds to outline milestones such as the release of Firefox mobile, the move to create a mobile operating system, faster speeds ("we beat last year’s Kraken scores by 74 percent, and we’re 88 percent faster on Octane"), better privacy and security, and more.

The browser maker also teases future plans, including a version of the software designed for Windows 8 tablets. "We can’t wait to see what other new innovations come to the Web in the next year! Join in on Twitter to celebrate Firefox. Tweet the hashtag #HappyBirthdayFirefox with your favorite Firefox memory or feature all week", the organization closes with.