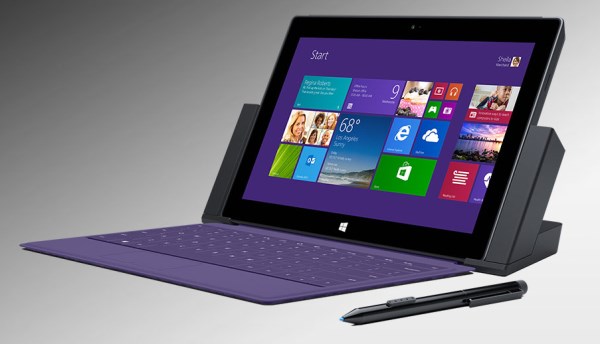 I'm a Surface Pro user; that I won't deny. I also own an iPad -- it's an old iPad 2, but it still does the job. It may not have the fancy 'more pixels than you can see without the aid of a microscope' display of newer models, but it's perfectly functional. However I'd still pick the Surface over Apple's tablet for just about everything. I'll admit I was tempted by the idea of an iPad Air when it was launched, but after thinking it over a little, I decided to stick with the old model and continue to enjoy my Surface Pro.

But the time will come when I am in the market for a new tablet. Having had my attention flagged by the iPad Air, it would seem that it would be a toss-up between the Surface 2 (Pro or regular) and Apple's offering. However much I think about it, I still find myself falling on the side of the Surface. Why? Several reasons:

1. Flexibility. There might only be two different models of Surface 2 available, but that's one more than is the case with iPad Air. Ok, if you want to get technical about it, there are various capacity Airs available as well as the option of a data-enabled model, but they are all essentially the same device. With Surface 2 there are the Pro and non-Pro versions. If you want to do things on the cheap, the RT model is available in the form of the Surface 2, but if you need the full desktop experience, the Pro model gives you the best of both worlds.

2. Storage. The largest iPad Air that's available has a capacity of 128GB -- Surface Pro 2 goes all the way up to 512GB. You might argue that life is lived in the cloud these days, but it is not always the case. Not all types of work are suitable for conducting online -- I wouldn’t fancy editing videos over a flaky Wi-Fi connection, for instance. Local storage is important and the Surface Pro 2 easily wins here. 512GB still not enough? That brings us on to point 3.

3. USB port. It's a little thing, but the Surface has a USB port. Need to charge a phone? Plug it in to the Surface. This is great if you're out in a coffee shop, only have access to one power outlet and want to charge tablet and phone. Need to copy files onto a USB drive? No problem... just plug in an away you go. Oh, there's the microSD card reader too. Like the idea of using a mouse -- plug one in and fling that cursor around the screen.

4. Kickstand. Working with a tablet is meant to be flexible. With the iPad you're restricted to working with the tablet flat on your lap as you hunch over it, having it flat on a table top, or working out some way of propping it up against other things. The Surface has the kickstand which, whether used in conjunction with a keyboard cover or not, offers a far more comfortable working position both on a table and in the lap.

5. It's different. The world and its dog has an iPad. It used to be cool, it used to be something people aspired to own, now it is tired, dull and common. It is very easy to deride something that is different, but this is not the same as trying it out and giving it a reasoned assessment. The idea of Surface seems strange to some people, but this is due, at least in part, to Apple's dominance -- thus far -- of the tablet market. However it is a delightfully well thought out product. To try it is to love it. If more people were willing to break away from the norm, more would realize that. I'm not convinced that the iPad is as popular as it is because it is the best tablet, more than the word iPad has become synonymous with tablets -- for many people other tablets just don't exist. They do. And they are better.

You can view my colleague Wayne Williams's counter-argument here.