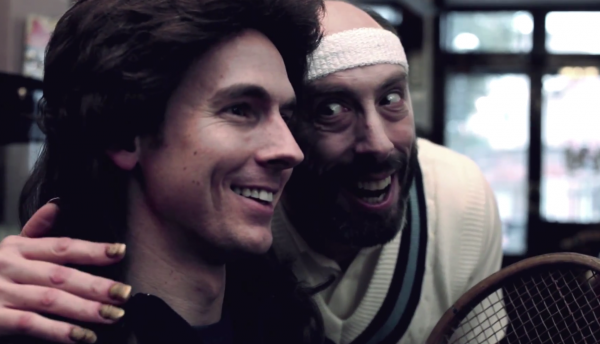 Nokia is one of the latest hardware makers to enter the tablet market, with the Lumia 2520. It's an interesting device, that has a great display, powerful internals, 4G LTE cellular connectivity, decent internal storage, an attractive price and Windows RT 8.1 on board, that you either love or loathe. And you'd think that Nokia would want to lure consumers with these features, to get them to buy its colorful new tablet.

Like Microsoft and its first Windows RT slate, the Surface RT, Nokia went on a different path to promote the Lumia 2520. The Finnish company has released an ad which, from my point of view, does nothing to explain to consumers why they should spend their money on the device. Do not get me wrong, the ad is very interesting but the way it goes about pitching the Lumia 2520 as a good buy is very, very strange.

The ad shows a man, in a salon, who wants to get a haircut. The barber tells him of all the ways he could cut his hair, in a very spooky manner. Even though the customer's hair falls on the short side, he opts for a mullet. The barber puts a Lumia 2520 in his hands and, as he starts to use it, his hair starts falling until he... grows a mullet. "All set for business" is what the customer says at the end, while the barber adds "All set to party".

"Balancing business and pleasure isn't easy. Keep the mullet alive. For work. For play. For the Nokia Lumia 2520", says the ad's description. I understand why Nokia would want to pitch the Lumia 2520 as a tablet that's good for both work and play (or, business and pleasure), but does the ad send this message?

If the barber was the person to actually use it (to showcase different styles, show the customer how they would look on him) that would have been a far more appropriate description, even though less bizarre and memorable. Nokia, however, is betting on the mullet reference -- business in the front, party in the back. But the customer is not seen as doing anything special with the Lumia 2520, only swiping on the screen and looking at apps. There is no interaction that would make viewers see the Lumia 2520 as a work and play device, more than they would any other premium tablet on the market for such tasks.

My colleague Mark Wilson said, in group chat, the Lumia 2520 ad is "sort of like a Guinness advert. It has not relationship to what is being sold". We both agreed that it will generate a lot of discussion, as it is quite memorable. It will probably create an association between the Lumia 2520 and "that weird ad with the barber and the mullet". But will it convince people to buy the Lumia 2520? I think not. It is selling a concept that is already adopted by many other devices on the market, without showing the value that the Lumia 2520 adds.