Bill Gates and the non-prediction prediction 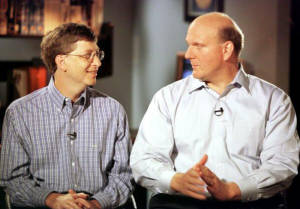 Following my #1 prediction yesterday of dire consequences in 2014 for Microsoft some readers challenged me to say what should happen this year in Redmond to right the ship. Is it even possible?

So here’s my answer which isn’t in the form of a prediction because I doubt that it will actually happen. But if it actually does come to pass, well then I told you so.

At this point in Microsoft’s history the only CEO who could follow Steve Ballmer and be more or less guaranteed to be successful is Bill Gates. I think Bill should take back his old job for a while.

Microsoft has become IBM, though not the rotten and corrupt IBM of today. Microsoft has become the IBM of the 1980s and early 90s when Steve Ballmer managed that most important customer relationship for Redmond. Ballmer learned as much from IBM as he did from Microsoft, Proctor & Gamble, or Stanford Biz School. It’s just a lot of what he learned hasn’t been that useful.

So Microsoft is today top-heavy with bad management -- managers managing managers who are managing managers -- and has for the most part lost its way. Ballmer, whom I have always liked by the way, is trying to lead like Jack Welch because he can’t lead like Bill Gates, simple as that.

Yet Ballmer is neither Welch nor Gates and that’s the problem.

If Ballmer stays on the Microsoft Board, anyone who follows him as CEO will be subject to undo criticism and a very short event horizon -- anyone that is except Bill Gates. Ballmer has no power over Gates and Gates for the most part doesn’t even care what Ballmer thinks.

But why would Bill Gates even want the top job at Microsoft? He’s moved on, after all, to curing malaria and saving the world, right?

Bill Gates would take the job on the right terms if it allowed him to realize a goal and imitate Steve Jobs.

Bill always admired Steve and marveled at his ability to inspire workers. Bill also pretty much gave up the idea that he could ever compete with Steve. But I think the current situation might change that. Bill might just now be able to out-Steve Steve.

The problem is Windows. The unified code base between desktops, tablets and phones was a mistake. Apple has OS X and iOS -- two different code bases -- for a very good reason. A phone is not a PC and a PC is not a phone. But to this point Microsoft has been too proud, too stupid, and too caught up in its own internal nonsense to admit this.

The only person who could cut through the crap at Microsoft and fix this mess is Bill.

Take the job for one year and $1 with the goal of delivering two new operating systems in 365 days -- Windows 9 and Microsoft Phone.

Bill has mellowed and matured in his time away. He’s simply a better person than he was and I think a better leader, too. Nor are the troops as over-awed as they used to be, which is good.

Bill could do this, and by doing so earn even more money for his foundation.