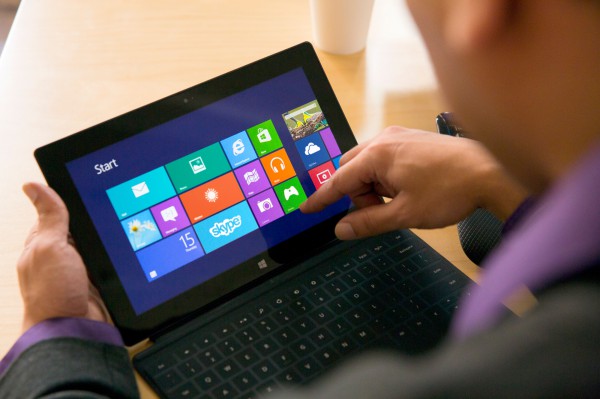 Outgoing Microsoft CEO Steve Ballmer got a vote of confidence from customers today, if Surface's sales surge is any indication. In October 2012, he refocused the company on "devices and services", something reflected in the Windows 8.1 tablet and also Xbox One, which launched during fiscal second quarter 2014.

For fiscal Q2, ended December 31, Microsoft revenue was $24.52 billion, up 14 percent year over year. Operating income: $7.97 billion, a 3 percent increase. Net income was $6.56 billion, or 78 cents a share. All figures are GAAP. However, when adjusting for pre-Windows 8 sales a year earlier, revenue rose by only 11 percent, while operating income and EPS both fell by 4 percent.

Average analyst consensus was $23.68 billion revenue and 68 cents earnings per share, for the quarter. Revenue estimates ranged from $23.26 billion to $24.3 billion, with estimated year-over-year growth of 10.4 percent. So Microsoft beat even the Street's high estimates.

The healthy revenue and profit performance validate Ballmer's "devices and services" bet, as the company seeks to divest dependence from an increasingly volatile PC market. Globally, personal computer shipments slumped 6.9 percent during calendar fourth quarter, which is concurrent with Microsoft's fiscal second, according to Gartner. IDC puts the decline at 5.6 percent, both huge numbers for a holiday quarter. Gartner describes shipments as "the worst decline in PC market history".

Analysts, Microsoft, and PC manufacturers had banked on emerging markets making up for declines in more mature ones, like Europe or the United States. Instead, for many buyers, the personal computer is no longer an option.

While Gartner believes the U.S. PC market has bottomed out declines, Christmas shoppers looked elsewhere. "Holiday sales of technology products were strong in the U.S. market, but consumer spending during the holidays did not come back to PCs as tablets were one of the hottest holiday items", Kitagawa says.

There's the major reason for Wall Street's watchful eye on Surface -- not just a tablet but one Microsoft makes. Windows' future increasingly belongs to the slate, and Surface promises the tightest hardware-software-cloud services integration of any model running the operating system. Microsoft needed to deliver Wall Street good news today and indication that the company has a future in the so-called post-PC era, which I define as the contextual cloud computing era. 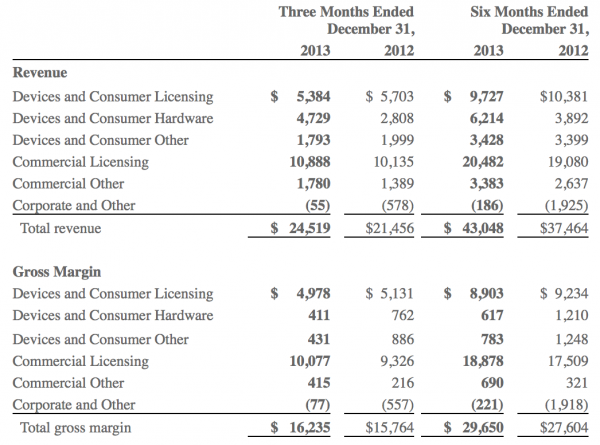 "Our Commercial segment continues to outpace the overall market, and our Devices and Consumer segment had a great holiday quarter", Ballmer says. "The investments we are making in devices and services that deliver high-value experiences to our customers -- and the work we are doing with our partners -- are driving strong results and positioning us well for long-term growth".

Xbox One's sales success is a mixed benefit. While the division's revenue rose by 68 percent, gross margins fell by 46 percent.

Devices and Consumer Other. Microsoft ended the quarter with 3.5 million Office 365 Home Premium subscribers. While relatively modest compared to the larger Office install base, these consumers pay annually if they want to keep using the software. That's steady revenue for Microsoft.

Compared to fiscal Q2 2013, the division underperformed, with revenue down 10 percent and gross margins off by 51 percent.

Commercial Other. In another validation of Microsoft's device-and-services push, cloud services revenue shot up 107 percent, while net seats for Azure, Dynamics CRM, and Office 365 soared by 100 percent.

Combining some data for both segments, commercial Office revenue rose 10 percent year over year, while server products grew by 12 percent.

85 Responses to Microsoft Q2 2014 by the numbers: Surface sales soar