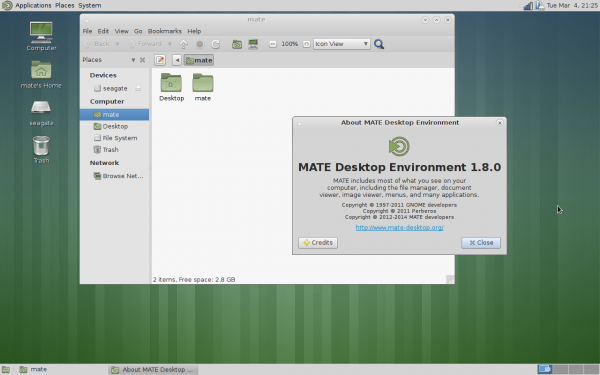 Linux users do not like change. Well, actually, they do not like change for the sake of change. If something works, they typically hang on to it until something truly better comes along. A good example of this is GNOME 2. People love it and it works well. However, the GNOME Project moved to version 3 and radically changed how it works. GNOME purists were angry as version 2 worked just fine -- for them. And so, many hung onto the outdated version, shunning version 3.

Luckily, Linux and open-source software enables forking. Forking is basically taking source code, but taking it in a different direction than the original creator. And so, The Mate Desktop was created as a fork from the ashes of GNOME 2. Today, Mate 1.8 releases to the world.

Wolfgang Ulbrich, MATE maintainer for Fedora says, "during the Fedora 15/16 releases I was very dissatisfied about the desktop solutions included. After 10 month of using XFCE I got noticed about the MATE desktop, so I decided to build my own desktop for Fedora in December 2011. This work resulted in the first external MATE Desktop repository for Fedora and was used by many users worldwide [...] MATE 1.8 is currently in Fedora rawhide and will be released with Fedora 21 in summer".

Stefano Karapetsas of the Mate team highlights the following changes:

Overall, this looks like a winner. Mate is a great desktop environment that is intuitive and easy on system resources. This is why I recommended it to Windows XP users looking to upgrade to Linux.

Do you use Mate? On which Linux distribution? Tell me in the comments.