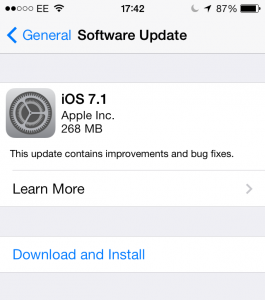 Among the additions are support for CarPlay, and enhancements to Siri, iTunes Radio, Calendar, and Accessibility. There’s also a new camera setting which can automatically enable HDR on iPhone 5s.

To make use of CarPlay you’ll need to buy a compatible vehicle, so few users will get much out of that inclusion for a while. With the Siri updates you can now manually control when the voice activated assistant listens to you. Hold down the home button, speak, and release it when you’ve finished -- just like using a walkie-talkie. There are also now more natural sounding voices for UK English, Australian English, Mandarin Chinese, and Japanese.

The iTunes Radio improvements include adding a search field above Featured Stations, and you can buy albums direct from Now Playing. You can also subscribe to iTunes Match directly from your device to listen to the service ad-free.

Calendar tweaks include the ability to display events in month view, and country-specific holidays have been added for numerous locations.

The update will appear automatically, ready for installing, or you can manually check for it by going to General> Software Update.