Do you abuse your keyboard and mouse when stressed? Microsoft researcher says you aren't alone 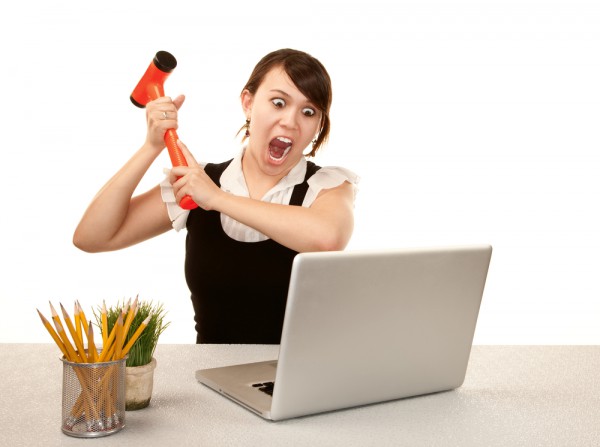 Keyboards and mice definitely take abuse. I have witnessed some horrific keyboard conditions -- full of crumbs, dust and lord-knows-what. Not to mention, have you looked in the seams of your mouse lately? There may be a build-up of grime -- yuck! Gamers in particular are known to severely beat the crap out of their input devices when playing a stressful game. Even if it isn't intentional, as a game of Quake 4 heats up, people are known to smash the keys on the keyboard and the buttons on their mouse.

If gamers are known to beat the crap out of their input devices when stressed, what is to say we all don't? In other words, whether writing a paper or editing a spreadsheet under a deadline, maybe the amount of pressure that the person uses can detect stress. Well, Microsoft researcher Mary Czerwinski and her team decided to prove that theory through experimentation. The findings are eye-opening.

According to the study, "recognizing when computer users are stressed can help reduce their frustration and prevent a large variety of negative health conditions associated with chronic stress. However, measuring stress non-invasively and continuously at work remains an open challenge. This work explores the possibility of using a pressure-sensitive keyboard and a capacitive mouse to discriminate between stressful and relaxed conditions in a laboratory study".

By analyzing the data, the research team makes the following observations:

While all of this is well and good, a great study not only tells a story and reveals observations, but provides solutions too. In other words, they have identified that people react physically to input devices when stressed and which tasks and times of day are the most stressful. Now what?

Microsoft researcher Mary Czerwinski says, "there are ways you can design software that would alleviate stress. If you're a software designer or a tech designer, and you're trying to figure out what makes people frustrated and what makes people happy, you're obviously going to design better tools. With pressure-sensitive keyboards, we could harness the signal and make great use of it. I get super excited about increasing users' happiness and the positivity we can bring to design".

Overall, the study is not earth-shattering -- the fact that people react negatively to stress and take it out on their keyboard and mouse is nothing new. However, the concept of utilizing pressure-sensitive devices to detect and track stress has many positive implications for workplace health; both physical and mental.

Do you pound or type harder on your keyboard when stressed? Tell me in the comments.

10 Responses to Do you abuse your keyboard and mouse when stressed? Microsoft researcher says you aren't alone