Microsoft selects Opera as default browser for its Android phones 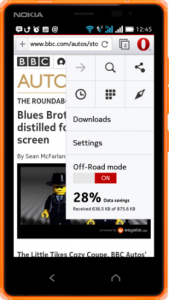 Every smartphone needs a default browser however, and the Nokia X2 is no exception. Sadly, Microsoft has not ported Internet Explorer to Android -- I would welcome that in the future though. No, it has chosen a different browser as default and it is not Chrome or Firefox, but Opera.

"With Opera, Nokia X customers will enjoy a super-fast web browsing experience while they save data, thanks to the Opera Turbo compression service embedded in the Opera browser. The news coincides with the unveiling of the new Nokia X2, the latest affordable smartphone from Microsoft and the first of an entirely new generation of Nokia X devices", says Opera Software.

Lars Boilesen, CEO, Opera Software explains "our companies have enjoyed a long history together, and this represents a huge step forward for both of the companies. We have worked closely with the Microsoft Devices Group on this project, to make sure the users of Nokia X affordable smartphones can have the best web browsing experience right out of the box".

The company touts the following benefits of its browser:

While Microsoft releasing a handset powered by a rival's operating system is shocking on its own, getting in bed with Opera is rather surprising too. They aren't necessarily bad moves -- both are sound from the perspective of diversity and covering all bases, but at what cost? This could send a message to the Windows Phone and Internet Explorer faithful that the company's eyes are wandering.

What do you think about today's announcements? Tell me in the comments.