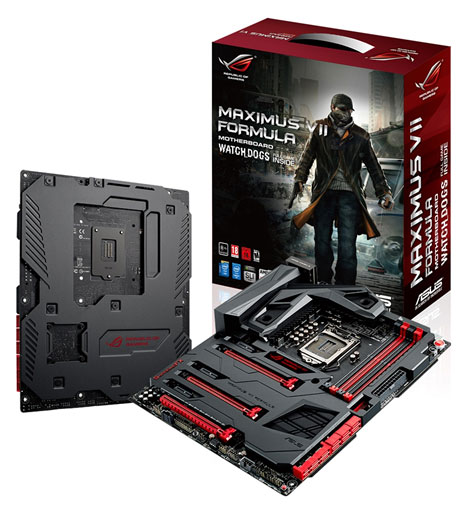 There are a lot of weird people on the internet, into all sorts of bizarre fetishes, interests and behaviors -- I wont judge. Well, maybe I will condemn Bronies. However, I too have a very strange fetish -- PC hardware. Yes, I love drooling over pictures of PCI cards, power supplies and motherboards to name a few.

Today, ASUS' "Republic of Gamers" enthusiast brand announces a beautiful piece of hardware -- the Maximus VII Formula. What is it? A super-sexy motherboard. If you are a tech nerd, this should definitely get your motor running.

The company further explains, "the exclusive ROG Armor is a dual design that compromises a strong and stylish ABS-plastic cover and an SECC (steel, electro-galvanized, cold-rolled coil) back-plate. The ABS cover blocks heat from graphics cards to help lower system temperatures for better performance, while the SECC backplate supports the motherboard to prevent bending and also employs thermal pads to conduct heat away from crucial components. Similarly, Q-DIMM's one-sided clips means handling memory modules is a cinch, and resettable fuses provide DRAM over-current protection that minimizes the chance of short-circuit damage to memory and connection ports".

Good lord. As you can see, this motherboard is chock-full of features and top-notch specs. Best of all, this will support 5th-generation Broadwell processors, so it is very future-proof. Quite frankly, ASUS has created something special for both gamers and general enthusiasts alike. However, features and specs are only part of the story -- it is also extremely sexy. Does a motherboard need to be attractive? No, it doesn't need to be. But, why shouldn't it? Even if you do not have a window on your case and even if no one else will ever see it, you will know.

Of course, to own such a beast will cost you -- $369 for a special bundle with the Watch Dogs video game and $319 for the unbundled Standard Edition. The Watch Dogs Bundle goes on sale next week at Newegg and Tigerdirect. Unfortunately, if you do not care about that game being bundled, you will have to wait for a later undisclosed date.

Does this motherboard turn you on? Tell me in the comments.