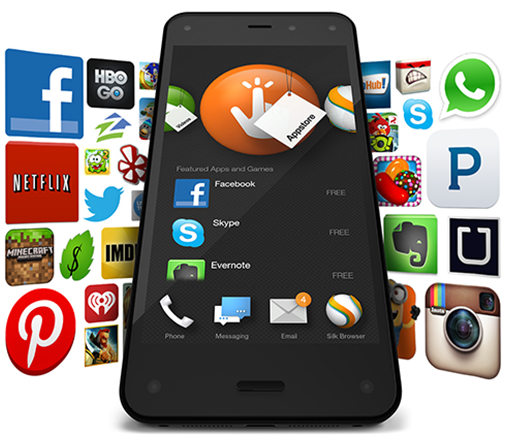 Nintendo has Mario. No matter how much more powerful Xbox One or PlayStation 4 are over the Wii U, neither console has Nintendo's Italian mascot. And so, if you want games featuring Mario, no other console will do. In other words, software matters just as much, if not more, than hardware. This is not just true of game consoles, but all computing platforms too. For instance, if you need Microsoft Office, Linux would be a poor choice -- you should use the platform that runs the software you need.

The most heated platform battleground nowadays is smartphones -- iPhone, Android and Windows Phone to name a few. Amazon recently announced its intention to enter the battle with the Fire phone. Yes, it runs Android, but it is so customized that it is essentially a new platform. Despite the phone's innovative hardware, it will not have access to Google play, and that makes consumers nervous. Like I said earlier, software matters. Worry no more. Today, Amazon announces that high-quality developers are embracing the Fire phone in a big way.

"Amazon Appstore selection has nearly tripled over the past year, and since Fire phone launched, the rate of app submissions to the Amazon Appstore has more than doubled. App submissions are at record levels in the five week period since launch. In the few weeks since Fire phone launched, developers have already found innovative uses of the phone’s enhanced carousel, Dynamic Perspective and Firefly", says Amazon.

Not only are companies such as eBay, Groupon, Fandango, Sega, TV Guide, Wall Street Journal and Whatsapp embracing Amazon's Appstore, but they are also customizing their apps to take advantage of the unique features of the Fire phone. This is key if Amazon's phone is to be a success. Time will tell if that will happen, but hopefully more developers continue to jump on board and increase the value of the device. Heck, more choice and competition is good for consumers, right?