What you should know about Windows Phone Store (other than it has 300,000 apps) 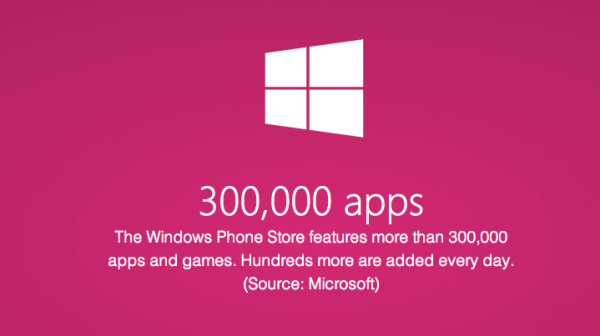 Windows Phone boasts more than 300,000 apps in Store. Now that the news is out of the bag, let's move on to something that actually matters.

I'm skipping the obvious comparisons because that number is meaningless to the average consumer making up the bulk of smartphone buyers today (and who is unlikely to take advantage of even 1 percent of those titles). It doesn't tell prospective buyers how many great apps are available in Store, or how many great apps are missing. It's just a figure that serves only one true purpose, and that is telling fans, enthusiasts, pundits and other tekkies how much progress was made since the last serving. But that doesn't make you feel all warm and fuzzy, does it? Here's what should.

The quality of Windows Phone apps has reached a point where it is good enough. (Not great, but good enough, as there is still work to be done.) What this means is that you get top apps, like Facebook, Facebook Messenger, Instagram, Skype, Twitter and Uber (just to name a few popular ones) with decent feature sets compared to their counterparts on rival platforms. Same goes for lesser known titles, some of which are feature-packed (look at Rudy Huyn's offerings, for example).

Windows Phone apps also feel and look like they were developed in 2014, not years ago (longtime Windows Phone users sure know what I mean). Those titles may get more frequent updates on Android and iOS (when a counterpart exists), but they have already reached a point where most people's needs are covered well. And, based on my experience, the missing features are becoming fewer by the update.

The number of quality Windows Phone apps has also reached a point where it is good enough. (The same observation as above applies here as well.) That means the casual smartphone user will have quite a few quality apps at their disposal on Windows Phone. Some of the more recent titles, that you may have heard of, which arrived on the platform are Adobe Photoshop Express, BBM, Fitbit, Flipkart, Microsoft Remote Desktop and Uber. There are others too, but these are the first wide-reaching offerings that spring to mind.

Third-party apps can fill the void, and sometimes even outclass the real deal. Competition among developers and the users' hunger for feature-packed apps have led to an impressive selection of third-party apps, which includes clients for Dropbox, Feedly, Foursquare, Gmail, Google Maps, Hangouts, Instagram, Pinterest, Pocket, Reddit, Vine, Tinder and YouTube. I use them all the time in the absence of an official app, without missing critical features (or, any features) coming from my Android devices.

There are missing apps, still, which can be a problem for some users. I admit that I am part of that group, due to my geeky nature (if I can call it that). I love to test all the latest and greatest apps I come across, and that can be a problem on Windows Phone as developers take their sweet time in releasing such titles on the platform (there's still no Flipboard, for instance, which is old news now).

At the same time, there are folks with specific needs which sometimes cannot be covered by the platform, like support for/from something local -- I find that, for instance, HERE Maps doesn't give me the same quality of maps and number of relevant (to me, at least) points of interest as Google Maps does, or that some local companies, like taxi firms, have no apps ready, or have poorly working ones, for Windows Phone.

Not everyone has those things to take into account, of course, but they do show that Windows Phone Store continues to have weak spots. That's happening in a time when Android and iOS offer pretty much every app you can think of. That may put consumers off, naturally, but I do not consider that to be a deal-breaker in most cases. But, you wouldn't know that just by looking at that 300,000 apps tagline in the photo above, would you?

31 Responses to What you should know about Windows Phone Store (other than it has 300,000 apps)