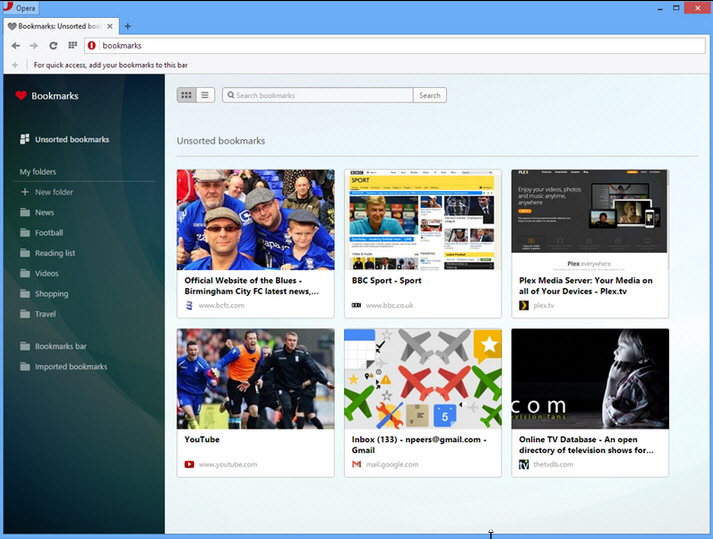 Opera has released Opera Beta 25, which sees the Opera Next channel renamed as part of what could be a landmark release for the alternative web browser when it hits final release next month. The headline new feature is the overdue implementation of bookmarks into the browser.

By far the most significant feature has to be added support for bookmarks, which has been the number one feature request from users since the new Chromium-based version of Opera debuted back in July 2013.

Users can now add bookmarks via the heart button to the right of the main Address bar -- once clicked, users get a choice of images, plus the opportunity to file the bookmark directly into a folder (new or existing). Sadly, Opera has still to implement an import option for quickly transferring bookmarks from other platforms.

Existing bookmarks can be accessed from the Bookmark Manager, accessible via the Opera menu or by pressing [Ctrl] + [Shift] + [B]. Users browse by folder using the left-hand pane, with that folder’s bookmarks displayed on the right, either as a simple list or as a grid with the associated image used to maximum effect.

Other changes in version 25 are note-worthy by themselves too. The Start page has been redesigned to use tiles instead of screenshots, inspired by Coast, Opera’s iPad and iPhone browser.

Version 25 also introduces support for H.264 video and MP3 audio, and sees the long-awaited Linux build move one step closer to final release as it finally joins its Mac and Windows brethren in the beta channel.

Opera Beta 25 is available now as a freeware download for Windows, Mac and Linux, and installs alongside other versions of the browser, including Opera 24 FINAL. Also available is Opera 12.17 FINAL.