Mobile Internet use soars, but tablets suffer at the hands of larger smartphones 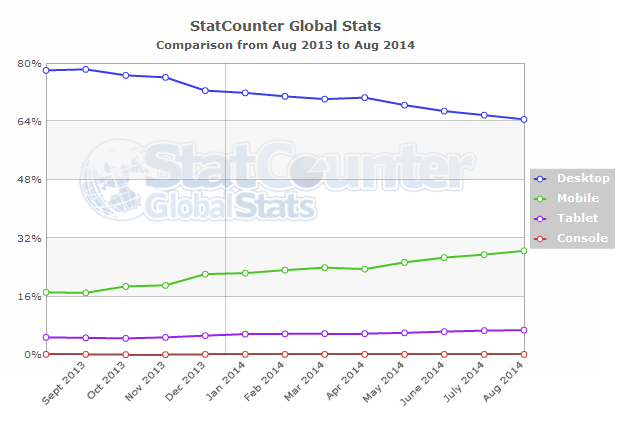 How do you view BetaNews and other websites? While desktop browsers are still the most popular way of accessing the web for most of the world, mobile internet use is rapidly gaining in popularity.

According to independent website analytics company StatCounter, the use of mobile devices to access the internet has increased by 67 percent worldwide over the past 12 months, from 17.1 percent to 28.5 percent (as you might expect, with its tech-savvy audience, BetaNews has a higher portion of mobile users, but more on that later).

Three years ago, the desktop was the main platform for accessing the web across the world, but that has changed dramatically. "Mobile usage has already overtaken desktop in several countries including India, South Africa and Saudi Arabia," says Aodhan Cullen, CEO, StatCounter. "All indications are that this trend is set to continue, which creates new challenges and opportunities for businesses globally".

To show just how much things have changed in that short period of time, StatCounter has produced this animated Gif.

Interestingly, tablet devices aren’t driving this trend as much as you might think. They account for just 6.8 percent of internet usage, compared to 4.8 percent 12 months ago. Aodhan Cullen, CEO, StatCounter says "The slower growth of tablets may be due to the trend towards larger screen smartphones. It will be interesting to see whether Apple’s new larger iPhone 6 Plus becomes a tablet killer".

StatCounter announced the findings to mark the launch of the company’s new web analytics apps for iOS and Android.

Wondering how many of your fellow readers view BetaNews on mobile devices? Well, based on monthly Google Analytics figures, it’s around 32.56 percent, with smartphones accounting for 24.80 percent and tablets 7.75 percent. The two most popular single devices are the iPhone (8.9 percent of all traffic) and iPad (5.47 percent).

One Response to Mobile Internet use soars, but tablets suffer at the hands of larger smartphones